Phew, it’s been really really hot!  Highs of 85 and bright sun for 3 days straight…..which translates to mid-90’s inside the camper, even with the vent fan running!  I don’t do 90’s.

There are just 4 campsites here, it’s considered Dispersed Camping so is only $4 a night.  The sites are huge, and only one has shade….#2.  I’m in #1.  The lake is pretty and has a nice sand bottom so wading is easy, and it does help to cool off a bit.  My neighbors say there are a lot of snapping turtles in the lake, and they even saw a bunch of them come up and lay their eggs last week!  Then something came and dug up most of the nests and ate the eggs.  Raccoon?  They also say this is a popular spot for bear hunting in the fall (gulp!).  And last year there was a pack of wolves that were killing local dogs, and even grabbed one while it was running next to it’s owner who was on a bicycle!!  Yikes.  They trapped the alpha male and dispersed the pack, thank goodness.  It’s bad enough to have to worry about a hawk swooping down and grabbing Princess Roxie, let alone wolves coming out to snatch & grab!  Yes, a friend’s dog (twice as big as Roxie) was grabbed by a hawk, but she was too heavy so the hawk dropped her. I’m sure Roxie would not be too big, so she’s never outside without me being right with her. 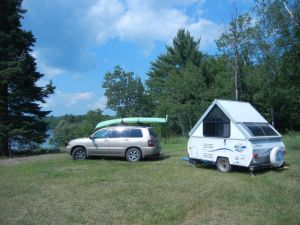 The first day I was here, a couple came to the lake to kayak fish.  The lady came up to me and said she had an ALiner at home, then she said “Hey, I know you”! She’d been with our WACS camping group at Hunting Island 2 years ago, right before I moved to Ecuador!!  (Donna from Cincinnati, who was with Jeanie)  I ashamed to say I didn’t remember her, though she did look a little familiar.  But how weird is that, to be out in the middle of nowhere and find someone who knows me!

My only neighbors are two couples in big 5th wheel & a big travel trailer, complete with generators, ATVs, boats, etc.  The women invited me over to play cards the other night but have not invited me back.  Maybe I should not have won.

It’s pretty nice during the day, there are some deer flies and some giant biting flies. Do those suckers have real teeth, or what?  They SLASH and blood runs down from their bites!  Then at dusk, the mosquitoes come out and even though I’ve stuffed every teeny crack and crevice that I can find on the trailer, they still are able to get in and torment me.  It’s kind of creep to look up and see dozens of them buzzing around the vent fan, slavering at me.  Hey maybe I’ll lose some weight from blood loss?

Yesterday to escape the midday heat I went driving around the area.  It’s just a bunch of 1 1/2 lane wide sand forest roads, but there’s an amazing number of lakes & campsites all over the place!  I love this little roads where the trees meet overhead. 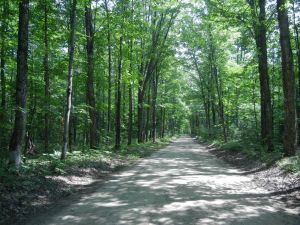 The other day I was sitting at the point in Grand Marais and this gorgeous boat purred into the harbor.  Oh man!

5 replies on “Cookin’ at Cookson Lake”

Sure looks beautiful where you’re at! ….and, yes, what a small world–meeting someone you knew from the WACS camping group at a campground that only holds four campers!

Looks beautiful and calm… hope you and Roxie stay away from the wildlife though.

Beautiful area. Nice that you are camping at a lake. Hope that the heat isn’t too bad. I just purchased an Aliner Sport which has heat but no AC. Sounds like AC is required here. I’m in the Pikes Peak region of CO and hope to use TC (tiny camper) to see more of this amazing state. How did your cabin purchase work out?
Happy Camping!
Linda and Echo, a very fun African grey who loes to camp. Can’t wait to show him TC.

Reminds me of when Paul and I went camping with boys. We slept in back of El Camino and boys in 2 man tent. We went to a camp where everyone had a RV with a TV. The boys couldn;t understand why we couldn’t do the same – told them we would have to give up eating to buy an RV. Still, these are some of my best memories of their childhoods.

Sounds nice except for the bears, wolves, hawks, mosquitos, and flies….. Just kidding. Our heat index was 110 today. Helping my sister move back to California, so hopefully there’ll be cool nights! Dixie and Ming