We are now camped at Curtis Creek Campground in the Pisgah National Forest. We’ve been here a week and have another week to go.  This is in the First Forest, the very first tract of national forest land purchased under the Weeks Act in 1911.  It’s tucked into a fold of the Blue Ridge Mountains, about 5 miles off the Blue Ridge Parkway on a very twisty-turny one lane dirt road with lots of extreme switchbacks and straight up one side, straight down on the other!  It’s a little nerve-wracking not knowing when you might meet another vehicle……then someone has to back up til they get to a little place where it’s wide enough for 2 cars to pass. Yikes.   There’s also easy access from I-40 in Old Fort though, and it’s only 6 miles to town that way. The campground proper has about 10 sites, mostly for smallish campers. They’ve got picnic tables, fire pits, 2 lantern poles, tent pads, nice vault toilets(not stinky) & water spigots.  All for $5 a night, or only $2.50 with the Geezer Pass! It’s unusual that there are also 5 or 6 roadside sites that are outside the actual campground, with huge grassy areas for tents. No electricity, of course.  The camp hosts are very nice and keep the place immaculate!.

Some of the other campsites here:

Curtis Creek is a noisy little stream about 50′ from my site, and there are steps down to a viewing platform.

Until he weekend, there was just one other camper besides us, but it filled up on the weekend.  Leaf-Peepers, I think, since it’s that time of year. I was surprised at how many tent camper there were, considering the weather….it’s been gorgeous in the daytime, around 70 and sunny….but cold at night, in the 30’s and one night all the way down to 32.  I’m managing to keep warm enough with my little 1500 btu Coleman SportCat propane heater. I have a small battery-operated fan behind it to blow the heat towards the bed, and that’s working quite well.

I got here last Sunday and was informed that Monday morning was the start of black powder bear hunting season!  It seems really strange that they’d allow bear hunting inside a bear preserve, but I guess they issue a certain number of permits. They said there could be dogs running through here in pursuit of bears.  Yikes! Well, how many black powder bear hunters could there be?  LOTS, as it turns out!  It sure seems very UN-sporting, the way they hunt.  They turn their dogs loose wearing tracking collars and then drive up & down the roads trying to figure out where they are.  I am not sure how they know when a bear has been treed, maybe when the signals don’t move for awhile?  Then they go in and shoot the poor bear.  They are based about halfway between here and the Parkway and every morning around 7:30 they all drive by in their pickup trucks with cages built in the back for the dogs.  The dogs have their heads and tongues lolling out between the slats, baying at anything they see, silly things.  So far I have not seen them carrying out any bears, and I’m glad.

The other day I made some really amazing gingerbread sourdough pancakes! I always add a little mashed banana to my pancakes, I’ve discovered it makes them really tender. In my Pancakes for One recipe, ¼ banana is just enough to give it the texture without adding discernable banana flavor.  Of course if I’m making banana-blueberry or banana-pecan pancakes, then I add more banana.  For the gingerbread pancakes, I added a little molasses, some pumpkin pie spice and ginger.  Mmmmm!

And the next day I made cherry-cheese stuffed french toast.  I added some cherry jelly to cream cheese and mixed it up really good. Then I cut a thick slice of bread and carefully sliced a slot through the center, and knifed in as much of the cherry-cheese stuff as I could; soaked it in beaten egg and milk and grilled it.  I also put the leftover cherry-cheese stuff on top when it was done.  Whip Hop, that’s something I’ll be having again for sure!  I do love my breakfasts……

I tried making pizza on my Weber Q grill the other day, it was not a success.  I couldn’t keep the bottom crust from getting too brown while giving the top part enough time to bake.  I placed the store-bought pizza right on the grill; maybe next time I’ll buy some of those disposable foil pizza pans and double or triple them to insulate the bottom crust.  It wasn’t BAD, but it wasn’t great.  Once I work out the methodology, I’ll be making my own pizzas.  It’s just a lot cheaper to buy pre-made pizzas if I’m not sure they’re going to turn out!

Before I left Asheville I was invited to a terrific  house concert by a Kansas group called En Power and Light….man & wife and his brother. http://enpowerandlight.com/ Their songs have stuck in my mind and it’s kind of neat that I can still picture them performing them as I listen on the CD player in the car.

One of the views from the Blue Ridge Parkway: 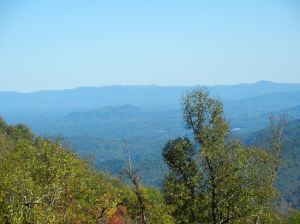 On a side note–the guys that so cowardly hunt bears have small penises….just sayin’.

Hi Janis, enjoyed your post today! I was wondering if you had a cast iron grill or skillet if it would be good to use for your pizza? I have seen all these folks doing dutch oven pizza where they put the charcoal up on top of the lid of the dutch oven and some down underneath. For just on a grill seems like a skillet or griddle would work well? Patti in Co

A dutch oven would be great, but I don’t have the space to carry one. I’m going to keep experimenting with the Weber.

I tried to make pizza on the Weber Q and ended up burning the bottom, too. I did try biscuits and I wrapped my four English muffin rings in aluminum foil, then placed the biscuits on foil and put it on top and set the grill at a lower setting. If you had a flat baking pan (metal) that you could wrap it in foil to raise the bottom of the pizza off the grates, you might have success.

Thanks Marsha; yep, I just need a way to insulate the bottom of the pizza. I’d love to try to make sourdough bread in the grill too.

I have driven over toward Robbinsville and checked out some cool campsites. Quite a few along the road where you park the camper and walk down to the picnic table and further down to the water. And there was a campground with spaces for tents and small campers. There were a few close to the water that appeared to be easy to get into with a small camper. Beautiful area.