This morning my GPS “Brunhilda” had a fatal stroke.  First she displayed nothing but vertical lines on the screen.  I didn’t see any signs of brainwave activity, so I pulled the plug on her.  Later I plugged her back in but she never regained consciousness. Rest In Peace, poor Brunhilda!  I am ashamed to say that within an hour I realized that I am completely helpless without a GPS.

I intended to go to the ghost towns Fairbanks and Charleston, plus Tombstone and Bisbee today.  But I got a late start and ended up lost in Continental. I stopped in at a farmers market there and took my map with me.  I asked directions from a guy selling bread.  Since he was so nice, I thought I should buy a loaf of bread.  I chose cinnamon-raisin and was very shocked to hear it cost $7!  That’s a first, I’m pretty sure I’ve never paid $7 for a loaf of bread before. But it does smell really amazing!

The shortcut road I wanted to take to Fairbanks turned out to be a dirt road and he didn’t recommend taking that.  The paved roads went WAY out of the way, and I decided that would get me home really late since it was already noon.  So instead, I went to Tubac., which is a trendy little art colony. Very cute if you have money to spend. A few miles past Tubac is the Tumacacori Mission, started in 1691 by Jesuits. The existing building was started in 1800 and finished in 1823.

On the way home I went to the WalMart in Green Valley for a new GPS. Got another TomTom with lifetime maps for $99. All hail Brunhilda II!  She’s busy getting all charged up right now but I feel better already. I really hate that I had to spend that money; I was feeling virtuous because I’d come in under budget on food, gas and camping fees this month.

I don’t know if we’ll get to those other towns now.  I really have to force myself to get out and go places; my nature is to just sit and vegetate., plus I worry about spending the gas money.  I guess it will depend on what time I get up tomorrow morning, as it looks like it would be an all-day trek.

I was wondering this morning if I’m supposed to be shaking the scorpions out of my shoes??  Or are they like the snakes and pretty much dormant at this time of year.  I guess I’d better find out!

And does anyone know what kind of tree this is? These are all over Madera Canyon.  I thought at first they were hollies, but then I noticed they have two kinds of leaves; the pointy holly type, and a plain vanilla version with no pointies. ??? 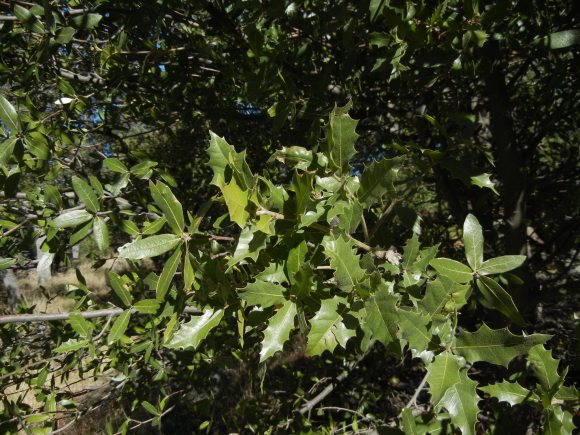 And for the record, that $7 cinnamon-raisin bread was incredible!!!

10 replies on “Tubac and Tumacacori (and farewell to Brunhilda)”

I’m on my 3rd “Wilma” she is my BFF when traveling I normally only have her speaking if I’m in a city to hold my hand till Im back out in the wide opens!

I hope Wilma lives forever! Wilma sounds like a much nicer GPS than my Brunhilda, who is often very pushy and domineering.

Isn’t it wonderful getting up when you want and letting the day develop at your pleasure. Enjoy! 💮

It sure is, Linda. I worked hard for nearly 50 years for the privilege of finally getting up whenever I want, and I love it!

You are doing great! I love Tumacacori but haven’t been there in years. Scorpions come out at night so don’t walk around outside without shoes. You are just 2 hours south of me. Take your time and explore every third day or so. I love your camp ground it is perfect for temperature and security. Arizona is a wonderful and different world enjoy. I love your blog and having been following you every time you show up on my fb!!!
Your friend!
Joanne

I’ve gotten so attached to a GPS that I use it as a speedometer. Love the software on the TomTom.

Reading this blog makes me realize how much there is to see and do in the U. S. !!!

Yes, and I’m missing a bunch of stuff that was on my list to see, too!

We sometimes just look in the general direction of a “site not to be missed”, lick our finger and make a check mark in the air! Sometimes I’ll look places up on the internet 5o see what I missed, but honestly too much of a good thing (site seeing) can be draining….loving your blog! Have gone back to the start and am binge reading!

I don’t exactly pretend I’ve gone somewhere I haven’t, but I do pretend that it was beneath me to go. Places that are holes in the ground like Carlsbad Caverns…..naw, don’t need to see that! So glad you are enjoying the blog!