Plans changed. Linda came here to Fortuna Pond so I’m not going to Anza-Borrego right now. Hopefully I’ll get to it later this month.

I’m enjoying having company for awhile!  She’s got Rascal, part Border Collie….8 years old and a really great dog.  He and Roxie pretty much ignore each other though. Poor Roxie can’t find anyone who’ll play with her!  The cute intact male Westie next door is enamored with Rascal & thinks he’s just the coolest dog ever, and he totally ignores poor Roxie, who is, after all, a GIRL dog and should be a lot more interesting than Rascal!  Linda says Rascal seems to exude some kind of cool-dog vibes, all dogs want to be with him.

I found out those black ducks are American Coots, also known as Mudhens.  Good to know.

Here’s a view of the Chocolate Mountains, which we can see from our campsites: 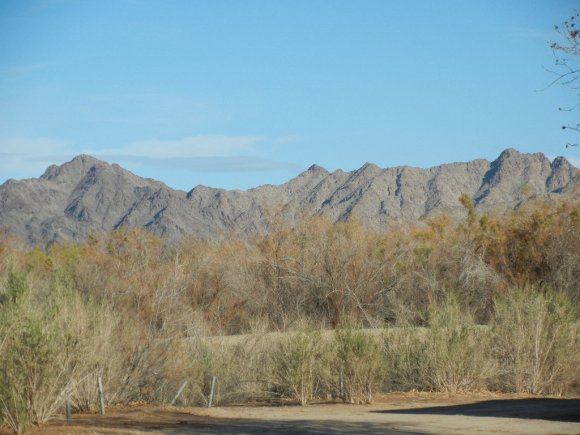 Tomorrow I’m going to Los Algodones, Mexico to the dentist! It’s a little bit scary, though literally thousands of Americans and Canadians do it every day.  Today we took a little drive to find the border crossing so we wouldn’t get lost tomorrow. I stopped and got some drinking water.  All over Arizona there are these water dispensing kiosks!  Usually $.25 a gallon but these are 5 gallons for $.50. Unfortunately I only needed 2 gallons but hopefully someone came after me and got some free water. 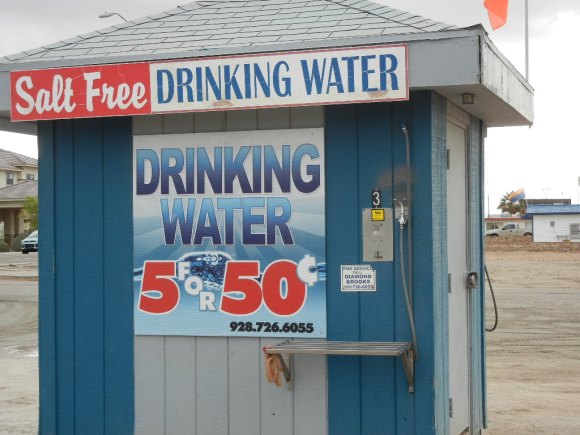 We also stopped at Martha’s Date Garden and got some huge Medjool dates for $4 a lb!  I shouldn’t have looked at the back of the package where it says that 4 dates = 250 calories. Yow, that’s a lot!!  I also had to get a date shake; I think it’s required when you’re in this area. http://www.marthasgardens.com/

Good luck with your new dentist.

Hopefully your dental visit went well today! Thank you for the link to the date garden, as I will definitely make my way there some day, yum….

Hope all went well for you today. It was nice that Linda is there for support.