I decided not to move on just yet; I paid for another two nights here at Crossroads CG.  I realized that I needed a picnic table for several chores. I got the kayak off the car and put 303 Protectant on it; it gives 100% protection from sun damage and should be used at least once a year, especially if the kayak is stored outside. Well mine is stored on top of the car so it certainly gets full sun!  I need to do all my tires too.  A really strong wind came up late yesterday afternoon so I strapped the kayak to the picnic table to keep it from blowing off; I still have a little bit more work to do on it before I put it back on top of the car. While I was applying the 303, I noticed the kayak is a “GoPro” model, and there’s a gizmo at the front where you can attach one!  Well I think it’ll be a long long time before I get a GoPro, but it’s a pretty neat idea.  (This is my new Jackson Riviera kayak) 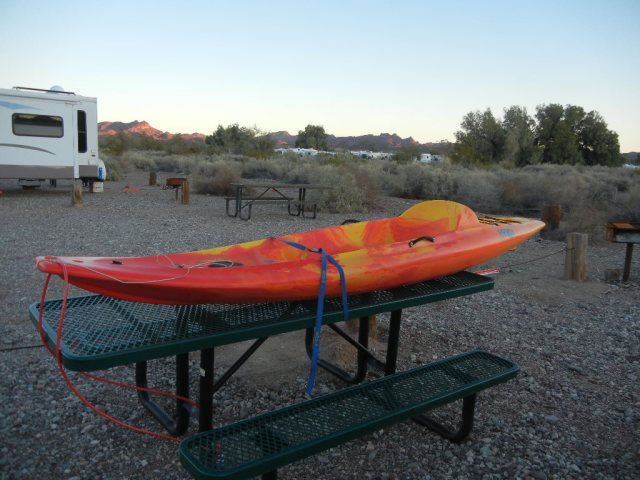 The other thing I did yesterday was to attempt to refill a bunch of my 1# propane cylinders.  It’s not as easy as it looks in the YouTube video!  I bought a $10 adapter that screws onto the 20# propane tank. Then you turn the big tank upside-down (that’s another reason I needed a picnic table) and screw on the 1# cylinder.  Open the big tank’s valve and gas flows in, but there’s a lot of air in the small cylinder so you have to either have the small tank much colder than the big one (and my teeny fridge doesn’t have space for even one propane cylinder, let alone 7 of them!) Or you have to take a curved forceps and pull out a little tiny valve stem at the top of the cylinder, tilt the big tank way over so the small cylinder is mostly vertical instead of horizontal, and bleed off the excess air…..while it’s facing away from you and hampered by the handles of the big tank! I was able to do that with 3 of them but I couldn’t even get a good grip on the rest. So I ended up with 3 pretty full ones, one that’s about half full and 3 that are about 1/3 full. That’s OK, my small catalytic heater will run for about 12 hours on a full one, so even those partials will be useful. I thought it was a scary project and I’m glad it’s done!

The third thing I need the picnic table for is to cook a little pork tenderloin I bought last week. I have a lightweight aluminum rolled table but my Weber Q is heavy and I feel a lot better putting it on a real table.  So I’ll bbq that this afternoon.

Thank goodness the wind died down at dark because it was really blowing in here; it would have been a really cold night!  We had another pretty sunset though.

Today I’m going to take a little drive up to the Bill Williams National Wildlife Refuge about 18 miles north of Parker.

This entry was posted in Uncategorized and tagged Jackson Riviera, Refill propane cylinders. Bookmark the permalink.