I had to purchase another travel insurance plan today.  I don’t need all the fancy bells & whistles like Trip Cancellation or Interruption coverage; I just need a bare-bones policy that’ll cover my deductible & co-pay for medical costs, the stuff that Medicare won’t cover. I always purchase my travel insurance through Squaremouth.com, they seem to have the best rates & the most options. I got a policy good for 90 days with $100k secondary medical coverage and $250k medical evacuation coverage for $29! Not $29 a month; $29 for 90 days! InsureAndGo USA is the provider. It’s comforting to know that at least while I’m traveling, a major health problem would not be life-altering for my pocketbook.

I’m so impressed with myself….aside from last weekend’s state park stay for the A-Frame rally, which I had paid for back in November, in the past two months I only spent $15 on campsites!  And that $15 was for SIX nights of camping, too.  So that averages out to $.25 a day, not bad!  I stuck to my budget this month and was even able to save a little bit.  Yayy!

Yesterday I got up early (for me) and saw the hot air balloons traveling really low. Can balloons go under power lines?! I swear these two did, though they were beyond the hill so I couldn’t see the baskets. Boy, if they did, imagine the poor people in the baskets…..that must have been a little stressful! 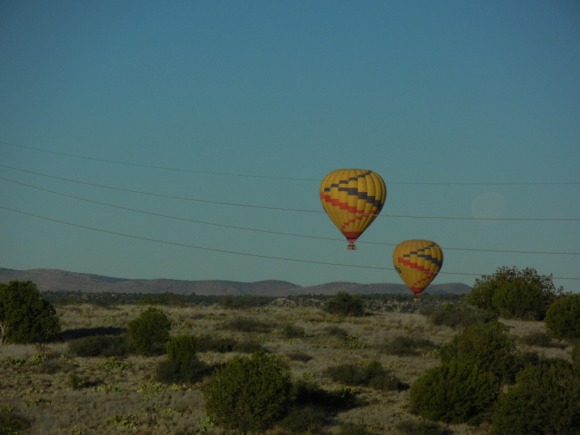 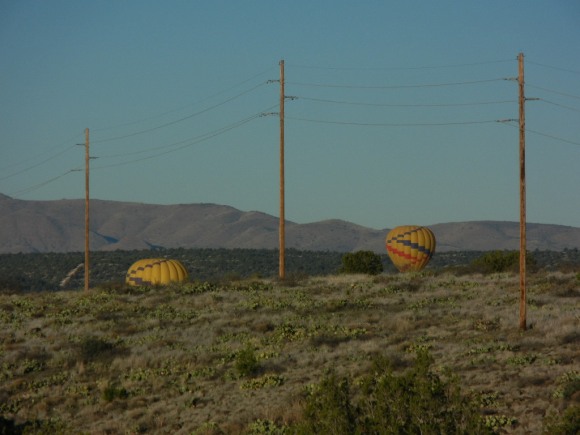 It’s been dipping down into the 30’s the past two nights, so I’ve kept the little Coleman SportCat 15o0 btu catalytic heater going. It keeps the camper at 62 degrees, which seems very luxurious! Here’s the heater setup with the little u-shaped barrier I made so Roxie won’t accidentally swish her tail onto the heater and burst into a ball of fire. The little green battery fan circulates the warm air and runs on rechargeable batteries, which have to be recharged daily. I’ve stuck a piece of foil over the front of the fridge so it doesn’t get too warm. This is a great little heater, it just sips propane….it will run for more than 24 hours on one bottle! I’m not sure why Coleman quit making them, unless it’s because they don’t have oxygen sensors or automatic shut-off switches if it turns over. I also have the Coleman ProCat model that’s 3000 btu but it’s too much heat for this tiny camper unless the outside temps are less than 25 degrees. 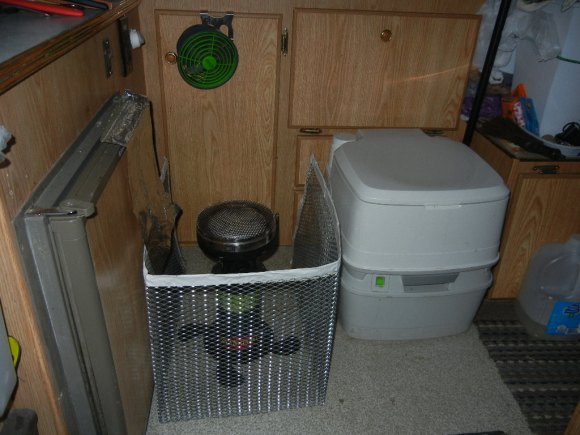 Finally I dragged myself out of bed early this morning to see the sunrise. Maybe I was a bit late, as it wasn’t that exciting. But here’s a photo just to prove I did it. 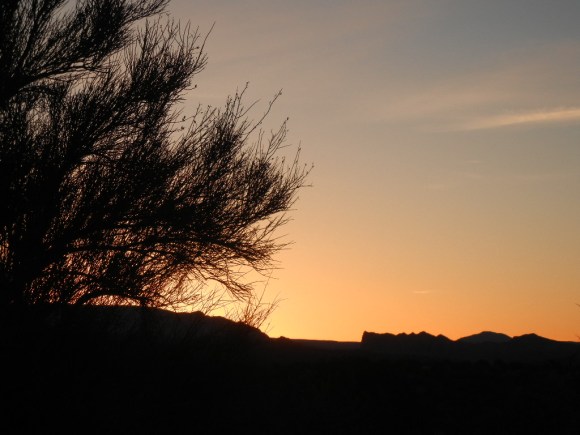 I bought myself a Mr Buddy the small one, it was $65 or so at Walmart. It also gets way too hot so I turn it on only when I really need it and on the lowest setting…

Yes, many people told me to get a Mr. Buddy but I knew it would be too much for this small space. With the weather I’m having, the SportCat is perfect!

I just popped over from RV Sue’s site to make this pleasant discovery. What a great blog you have! I’m like minded in that I am a solo female puling a small RV (13′ Scamp) and prefer boondocking and primitive campgrounds over the more organized campgrounds. I don’t full time but am out exploring in the high country of The West to escape the desert heat for 5-6 months at a time. I have a Mr. Buddy that I like but find that it doesn’t perform well at the higher altitudes due to its O2 sensor–a built in safety feature. I’m looking forward to following you on your travels and adventures.—Audrey

Hi Audrey; welcome! I’m already in “escape the heat” mode here in AZ! The nice thing about AZ though is that if it’s too hot, you can head for a higher elevation.