Tuesday, March 1    I woke up early this morning and looked out and the creators of all those cowpatties were all around the camper! As soon as I opened the door they started moving off though, so no cow confrontations today at least. Roxie acted as though having cows 30′ away were an everyday occurance,  ho hum. By the time I got the camera out, they’d moved so they were backlit by the dawn so the photos turned out bad. Sorry. I know you yearned to see pictures of black Angus cows today.

Sunday, March 6  The directions I had to the free campsite in the Coronado National Forest said it was 1.5 miles down Pinery Canyon Road, right before the entrance to the Chiricahua National Monument. Well that was wrong; it was 5.5 miles! And that’s a LOT when it’s a super-dusty, super-washboarded 5 mph road.  So in essence it was 30 minutes drive from the paved road. Once you see the “Portal 19 miles” sign, you’re almost there. There are 5 campsites on the right, and if you continue on up the road there are a few more but the road narrows and starts twisting and turning a lot before too long. But our campsite was awesome!  It was huge, and right on a pretty little creek and in the woods. The first few mornings I’d get up really quietly and grab my camera & go outside fully expecting to see some kind of wildlife drinking at the stream. No luck. The only drawbacks to this site were the really loose, fine dust taht got all over everything, and some really sticky grasses that made Roxie look like an angry homemade porcupine! They were really hard to get out of her coat.

My campsite….campfire pit in the right foreground.  The creek runs along the right side. 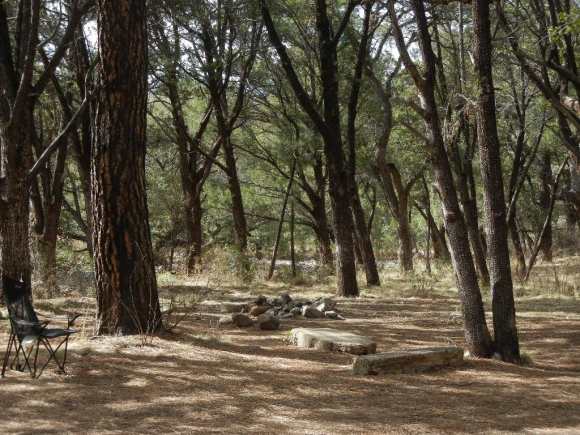 Deb and little Annie (Mini Schnauzer) arrived Tuesday afternoon. One day we took a ride farther up the mountain to scrounge for firewood. This is the same road that goes up & over to Cave Creek Recreation Area and Sunny Flat Campground, the most gorgeous campground ever. Well, so far.  The forest service guys told me the road was still closed due to snow in the pass.  It narrowed and started twisting around so after awhile I got worried about being able to turn around, so we headed back.

The scenic drive at Chiricahua National Monument is closed for construction right now but I’m pretty sure the views would be similar to those up on the mountain. 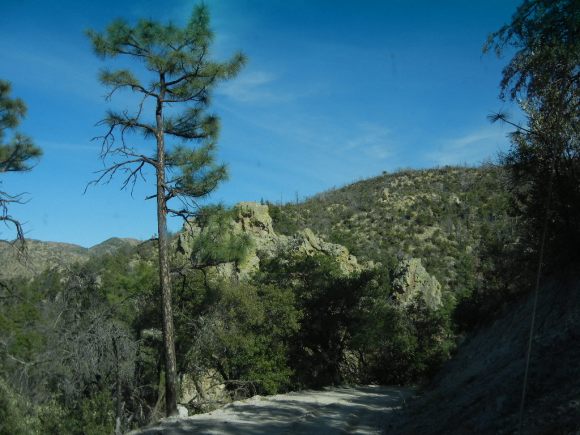 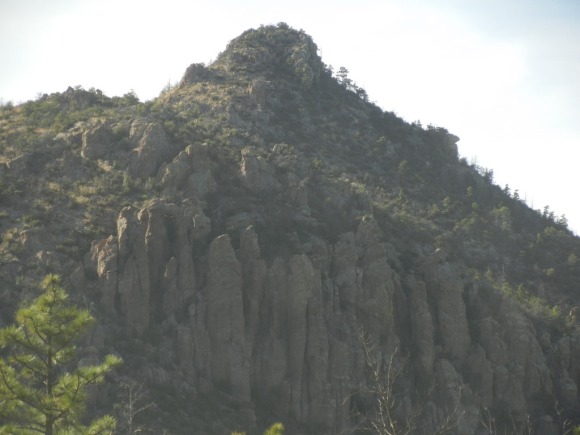 We went over and checked out the campground there, it costs $12 ($6 with the Geezer Pass) and I didn’t like it at all. It looked really crowded, the sites were tiny and entrances to the sites were narrow. They say they don’t allow anything over 29′ and I think it’d be really difficult to get a 29 footer in there! They do have water, flush toilets and garbage receptacles over there though, plus a nice little park office & store. I was shocked that the campground was full by Thursday afternoon.

We were able to get 1 bar of Verizon service at the end of Pinery Canyon Road, but on my phone it would only send & receive texts, nothing more. I was 40 miles from a wifi signal for 6 days and I survived!  Just barely.

Deb has an iBall hitch camera like mine and she was having the same problems, just getting a screen full of static. She said she thought it might be a low battery which I thought was really dumb, but I changed the battery and now it’s perfect again! Dang, I hate it when other people are smarter than I am, but I’m glad it’s fixed.

Deb’s been having a lot of battery problems and ended up having to go buy a new one.  I don’t THINK it’s me, but the same thing happened last August when we were in Michigan!

There’s a really cold spell on the way so we headed toward Tucson to escape the 25 degree lows. We are now at Snyder Hill BLM area which is just 8 miles south of Tucson! Great location, and it has really good wifi and phone signals, whip hop!  There are a lot of other RV’ers here. Here’s the view from my door:

And here’s Deb, with Snyder Mountain behind her. A lot of people hike that “mountain”, it seems. Maybe Deb will go up and have a look around. Not me, I think I have done something semi-serious to my knee last week. I thought it hurt because of hiking a whopping 1/2 mile at the Honanka Ruins, but it’s not that, I think I vaguely remember twisting it on a rock when I was getting ready to leave Sedona. It didn’t hurt much right then but it sure hurts now, I can’t bear to twist it at all and it even hurts at night when I’m laying down. I hope it goes away soon.

First off, I hope your knee feels better soon. I hurt my knee and it felt like how you describe. It turned out I had to stay off it as much as possible for months (and months) before it healed up decently. If you can immobilize it with a brace or even bandages, and wear that whenever you can, like at night, it should help it heal faster. Of course ice, but I know that’s not available. Good luck!
Second, what a gorgeous campsite you have! I’ve bookmarked this post just to have a reference to it. 🙂 NM is on my to-go list for sure.
Be well, and have fun!
Parker

It truly was a gorgeous campsite. I am actually carrying a knee immobilizer but I’m trying to avoid using it, it’s such a pain in the butt to wear.

Aren’t the Chiricahua’s great, Janis? Sunny Flat is one of my faves also and I have good memories of several Thanksgiving celebrations there with some camping friends. We did our entire meal outside over a fire pit and deep fried the turkey. Good times and fun to experience the holiday in a non-traditional way. From your description, I think you were camped along Turkey Creek and I’ve used the same area a few times myself. A very nice setting and usually peaceful. Better rest that knee and stay off it as much as possible so it can heal. Pack yourselves into a vehicle along with some lunch and a deck of cards and go to Madera Canyon (just East of Green Valley off of I-19 and a 40min drive from where you are) for an afternoon. Prop your leg on the picnic table seat and play a few games of cards. The birds are very interesting and you can check out the small NF campground, Bog Springs while you’re there. I’m all about free entertainment and Madera Canyon fits the bill. Stay safe, heal quickly, and enjoy the road!—-Audrey

I’ve been to Madera Canyon, and camped at Bog Creek for a couple days too! I think we’re going to sightsee Tucson a bit but I’ll try not to do much walking.