We’re still at the Verde River campsite; I’m tinkering with the idea of moving but I seem struck with inertia when it comes to actually packing up and doing it.  I’ve been looking at the weather for some of the surrounding areas but can’t decide where to go next.

This morning I saw this bright yellow bird across the river….and I can’t identify it. It appeared to be mostly yellow with some black on the back or wings. Anybody got a guess?  Sorry the photo is not very good, it was far away and it kept hopping around a lot. It sure was a bright splash of color!

It’s been cool at nights, down to 35 degrees sometimes but the days have been really nice, right around 70.  We had two days of rain!!!!!!  That was strange, after going so long in the desert with no precipitation at all. We even get dew at night here!   The sunsets are pretty but much milder than in the desert too. 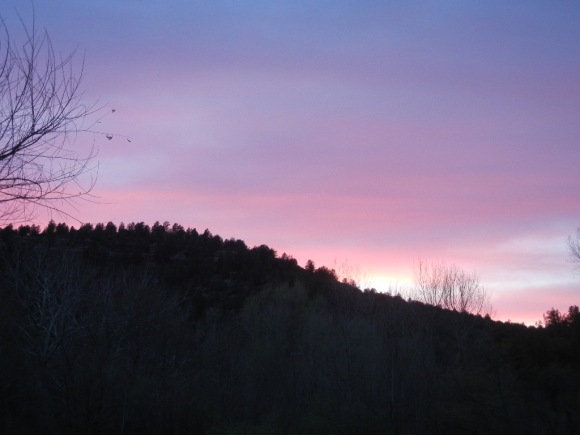 I saw this sign near the library. I just love weird signs!  Ehhhh…no comment on this one, though there are several that come to mind!

I need a dentist again.  That bridge I got in Mexico is already loose and wanting to fall out!! Well I can’t afford to go to a dentist until after my next SS check on April 27, so it’ll have to be loose til then.  How depressing that it seems like there’s always something going on that needs money thrown at it.

That might be a goldfinch which is a seed eater. Watch for more.

Probably all you need is a little glue for the bridge. I hope it doesn’t come off. Be careful chewing.

I am hoping it just needs some new glue, but still, a dentist appt. is probably going to cost around $100. All the goldfinch photos I see, they have way more black than this bird! So I don’t know.

I agree that it looks like a gold finch. My father in law used to tell me they were called wild canaries!! He insisted.

We always called them wild canaries too.

What a beautiful spot, been catching up on my reading, you are parked at.

I have an app on my phone, it is free, that has helped me more than once to identify a bird. It is called The Cornell Lab Merlin Bird ID.

Thanks…I’m having a lot of trouble with my Smartphone, it’s acting Dumb and I can’t seem to get any apps to work. i am working on my summer U.P. travels now! Hope to catch up with your guys at some point.