Jeanne and I went to the Hoover Dam today but we didn’t actually get to see it. I usually research places I’m going to go but for some reason, this time I didn’t do it. Wish I had. It was only a little over an hour’s drive from Kingman and we stopped in Chloride along the way to show Jeanne the cool junky yards, boot fences, bottle trees and the neat little general store.  When we got to the dam I missed the parking garage closest to the visitor center so had to drive over the dam to the other side. We turned around and went back, and the lady in charge of collecting the money ($10 to park, but free if you have a Handicap Placard) asked us if we had any dogs in the car. We said yes and then she said we could not leave the dogs in the car alone, someone would have to stay with them. We asked if there was anyplace we could park and see the dam and she told us to go to parking lot #9. So we drove back over the dam again.  We could NOT, in fact, see the dam from there but I took a photo of the teeny bit of water we could see:

I don’t know what those big columns are for.  So we decided to go back over the dam to the parking garage and Jeanne would stay in the car with the dogs while I went into the visitor center, since she’d already been there before. This time when we pulled into the garage, the lady said we could not have the dogs in the parking garage at all, not even if someone stayed with them! So Jeanne offered to drive the car somewhere & wait while I went into the visitor center. I walked down to it (farther than my knee wanted to go) and found out it costs $10 to get in!  That’s not for the tour, just to enter the visitor’s center. Hmmmm.  Well I can’t pay that, and the Geezer Pass doesn’t work there, so I called Jeanne and asked her to pick me up out front.  She came along and I hopped into the car and we went over the dam, turned around and headed back to go back to Kingman.  Have you kept track? We went over the dam six times! But never actually SAW the damn dam.  Oh well, nice day for a drive.  (Pouring rain the whole time, actually!)   I guess I can still say I’ve been there.  When we got back I read that pets are not allowed on the premises at ALL.  I wonder why?

Yesterday I finally bathed poor filthy Princess Roxie. We went to the do-it-yourself dog wash for $10.  She did not appreciate my efforts at all but I’m a lot happier!  She looks pretty grumpy, eh?   She HATES water!

Yesterday we went to check out a sort of tiny quartz quarry (?) that Deb found on one of her walks. LOTS of pretty white rocks there with red and/or golden veins, and Jeanne loaded up some medium-sized ones for her rock garden at home in NC. This is only the first stop and she’s already loaded up at least 20# of rocks in her car….wonder what she’ll have collected by the end of the 6 week trip! 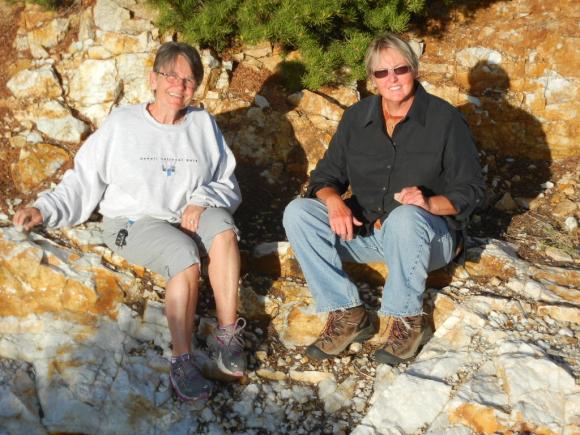 This is the 3rd straight day of rain…sometimes off & on, sometimes hard rains. I hope this is the last of it. I guess I’ve been pretty lucky so far that there hasn’t been much rain at all.

We drove over the new bridge to get there, then back & forth across the actual dam 6 times!