Yesterday we went to Sedona…what a gorgeous place! A little pricey too. We went to the Tlaquepaque Plaza shopping center which is supposed to have the best arts & crafts. It’s beautiful, with statuaries, fountains and pretty flowers. Of course we couldn’t afford a THING, but it was fun to look.  Does anyone know what these flowers are? Maybe hollyhock??? 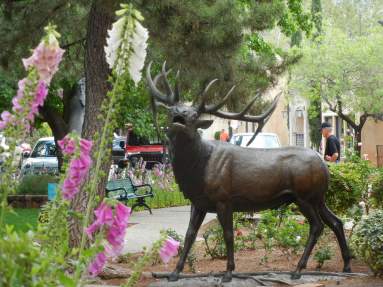 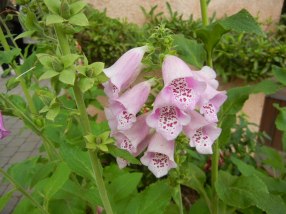 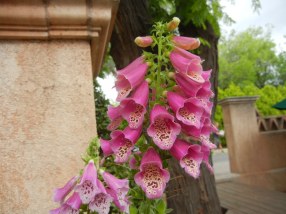 Views of the red rocks….I couldn’t capture the true colors!  It was a rainy day and we even had some hail for awhile, when we were trying to go to the Holy Cross Church (church on a rock, it’s often called). It was designed by Lloyd Wright, the son of Frank Lloyd Wright, and the views from the tower are supposed to be really incredible. Well it was raining and hailing so hard, the little golf carts used for the handicapped people (3 of us!) were not available. So we crept up the hill to the church in a long line of cars, then crept back down. 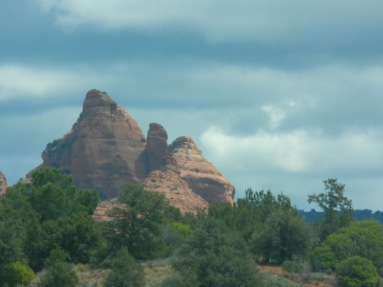 We had a really good lunch in honor of Jeanne’s sister Joanne’s upcoming birthday at Oaxaca Mexican Restaurant, then came back home.

This morning three hot-air balloons landed in the field right next to us! I missed it, I slept through the whole thing and only saw them when they had the balloons all rolled up and ready to put into the chase vehicles.

Today we first went to the RV dealer to see if they could figure out why Jeanne and Deb are having so many battery problems, dropped the batteries off and went to Montezuma Castle, some really interesting ruins that go back to about the year 1125. And it was not a really long walk, so even *I* could go! 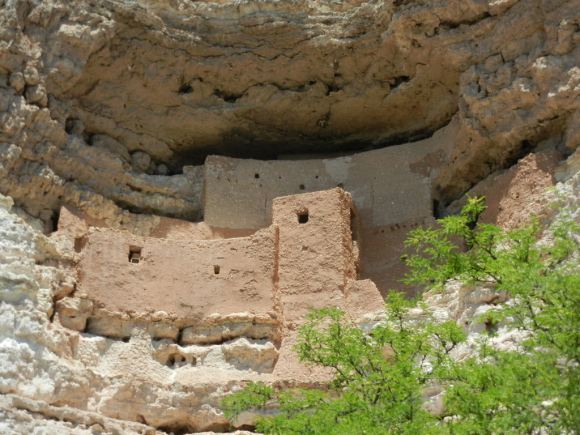 On the way back we stopped at a little booth at the side of the road and had some Indian Fry Bread for $4.  OH MY!!!  I want more of that!!!   Jeanne and I split one and I wish I’d gotten one all my own. We got 1/2 cinnamon-sugar and 1/2 honey. Both were really REALLY good. 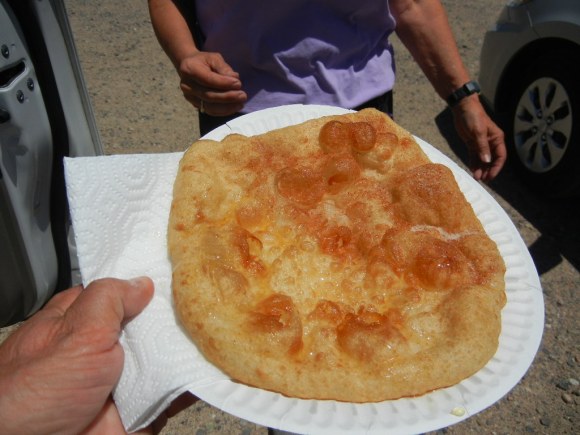 We stopped back at the RV place and they said both batteries were good; they felt maybe they were not getting fully recharged during the day, so they were not holding a charge all night. It’s still a mystery why those batteries won’t run their refrigerators all night (set on propane, so they should only draw 1/2 – 1 amp per hour fort the electronics & fan!)  I checked my battery and I see why I never have these problems; I have a Group 31 AGM battery with 105 amp-hours. Jeanne’s is only 56 amp-hours and Deb’s is a Group 27 @ 75 amp-hours. Plus my old fridge has no electronics, so it uses no electricity. They put a good full charge on both batteries so hopefully we can keep them charged up now.  I’ve been putting my 100 watt solar panel on Jeanne’s battery every day but perhaps not for long enough.

Those flowers are foxglove (digitalis). Very common as a wildflower where I live. The purple and white ones are the most common but I’ve seen other colors as a cultivated plant.

Thank you, Tom! They were beautiful….I loved their freckles!

Two possible reasons for battery problems while boondocking occur to me.
1. Don’t leave any inverter running when not using it. Idle current may be as high as 10% of rating, and the larger the inverter the greater the waste..
2.. Some propane fridges have a 12 volt heater inside the freezer door seal to keep it from freezing closed in high humidity areas. Open the freezer door and feel the compartment lip where the rubber seal on the door seats when closed, to see if it is warm. If so, look at the top inside frame of the freezer and you will see a small switch which should be turned off when boondocking.

I hope this helps.