We’re still at Zion. This is our 3rd day here and we haven’t yet seen the main part of the park! The day we arrived, we were setting up camp. Yesterday we did chores…laundry, grocery shopping, etc. We were pretty horrified with the prices at Sol Foods!! We had plans for a big feast…pork steaks, corn on the cob and baked potatoes, and we were each going to get a pint of good ice cream for dessert, with some Sanders Fudge Sauce that I’ve been hoarding. (A Detroit treat)  Well they only had a very small selection of meat so we ended up getting some chicken thighs that were on sale. The Ben & Jerry’s or Haagen Dazs was $8 a pint!!  So we got a half gallon (or what passes for that these days) of ordinary ice cream on sale.

I got out my trusty Weber Q300 grill (which takes up more than half of the back seat of the car!) and I decided to brine the chicken. I prepared the brine solution with salt, some seasoned salt and chili powder. I trimmed one piece of chicken and put it in the baggie, and the whole thing slurped off the countertop and sloshed down my pants and shoe and all over the floor and rug! AARRRGH!  So I had to make more brine solution, change my clothes and throw the rug in the trash. I’d just done laundry earlier that day and already had a bunch more!  The chicken turned out nice and juicy from the brining, and we also grilled up a package of brats to have for later meals. Our corn on the cob was excellent and the hot fudge sundaes later were great! (And we have enough for one more round of sundaes)

This morning two dainty little mule deer started feeding right across from my campsite! People walking by didn’t bother them a bit.

So I went today and did more laundry, since those are my only decent shoes. We took the park shuttle in late afternoon. Starting in early May, there are no cars allowed on the park road, you have to take the free shuttles. The canyon walls are so high, we could see them while looking out the TOP skylights of the shuttle bus!  Very beautiful in the late afternoon light; pictures just can’t do it justice. 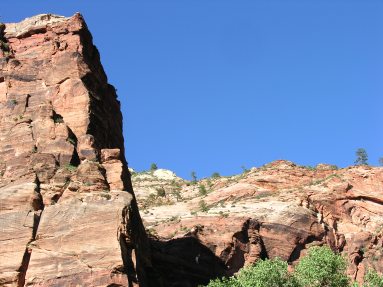 This afternoon we went to the really excellent rock shop in Springdale, just outside the park. It’s not bad enough that we are picking up rocks all over the place, we also have to BUY them! I only get little tiny rocks because I don’t have space OR money for rocks. The rock shop guy was really nice and he gave me a great deal….all these beautiful rocks for $5!  Jeanne got larger rocks so spent $13. She has picked up enough rocks to completely cover the top of the picnic table at her campsite!! We all like to lay them out and fondle the good ones, gleefully gloating over our great finds.   The first photo is flourite, the picture sure doesn’t do it justice, as it’s very pretty purple & green. IN the second photo is Dendrite, then (L to R)  sandstone, the flourite, and pink quartz. Boy I wish we could find some of these “in the wild”! 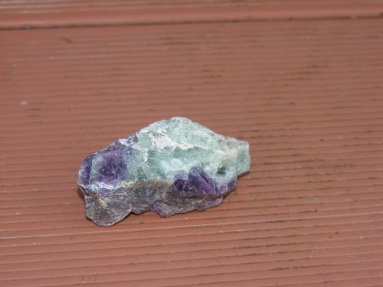 Deb and Jeanne wanted to hike at least part of The Narrows (a slot canyon) but we had a hard rain in the afternoon so it was closed.

On to Bryce Canyon tomorrow!

Janis,
Are you traveling with a group or by yourself and meeting up with friends?

Vicki, some of each, I guess! This part of the trip (the National Parks) was actually the original plan, with 3 of us. Then I expanded it to include me going out to AZ for the whole winter. Friends drop in and out at times!

I remember our trip to Zion. We stayed at the Watchman in the park too. Loved the shuttle service and letting them do the driving. We too shopped in town for rocks as gifts, but ended up purchasing petrified wood! On that dendrite, is that fossilized plants?

No, the fact sheet he gave me with the dendrite says they are branched or tree-like inclusions usually caused be irreversible aggregation of small particles forming large clusters of manganese or iron oxides. In other words, the metals in the dirt stain the rock, in this case quartzite, in a random pattern. Rock are GREAT souvenirs! After all, the last forever!

Have u guys found any Put-er-ites or Leave-er-ites?
You know…”put er right back” and “leave er right there”

Nope, we are good girls…we don’t pick up rocks from the National Parks.