Today we went outside the park on the west side, to the ghost town of Terlingua. I was interested to see it because I used to own  5 and 13 acre tracts of land near there at Terlingua Ranch, which I bought and sold sight unseen. I got gas in Study Butte (pronounced Stoody Byute) for $2.609, not cheap but at least it’s $.10 a gallon cheaper than inside the park. Terlingua is a really funky little place, with people living in shacks, nice homes, teepees, tents….you name it! I really like adobe and this isn’t this the cutest little adobe tiny house!

And the next door neighbor is this teepee! There are quite a few old adobe and rock remains of homes. 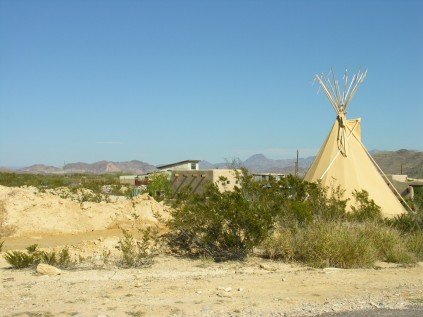 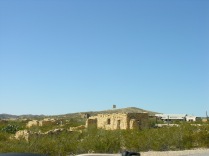 Near town is this place, shaped like a clipper ship. In case you can’t read the sign, it says “Passing Wind”!  At another house that had a completely sand yard was a sign that said “Keep Off The Grass”. 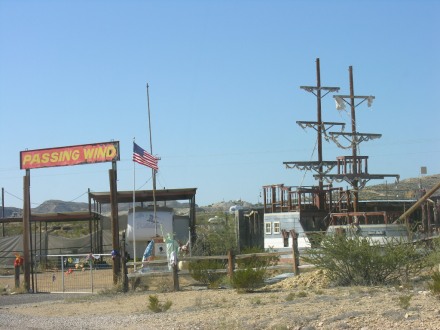 In Terlingua there’s a really nice store with Texas and Terlingua souvenirs and gifts, and next door is the Starlight Theater. You can get dinner and a show! There’s going to be a live band tonight and I think my neighbor Neal is going.

I keep seeing coyotes coming and going on “our” Grapevine Hills Road but they always disappear into the brush when I get close. Today there was one that slipped into the brush but when I got to the place where he left the road, there he was! He stood and modeled for me while I look at least 6 or 7 great photos, then trotted off. Then I noticed the little yellow blurb in the camera that I’d been ignoring, it said “No memory card present”. I didn’t get ANY of those photos!!!  As I continued toward our camp, I saw another coyote that was trotting up the road and went around a bend. When I got around it, there was our campsite. And the coyote was right there! He sure had no fear of humans; Neal was standing in the doorway of his camper and the coyote went within 4′ of him! He too stood around for long enough to me to get some photos but I’m sure they are not as good as the ones I couldn’t keep. 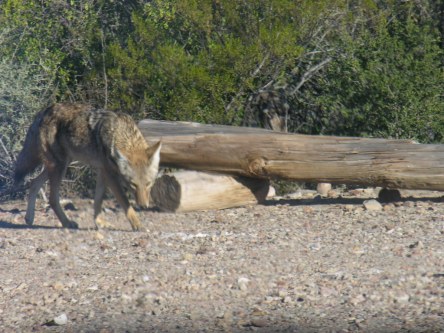 On the way home I drove up to Chisos Basin; there’s a visitor center, campground, store and lodge there. The terrain is completely different….lots of conifer frees and there were signs warning of bears and cougars. There was even a “bear crossing” sign but I guess I was there at a time when there weren’t any crossings scheduled, as usual. 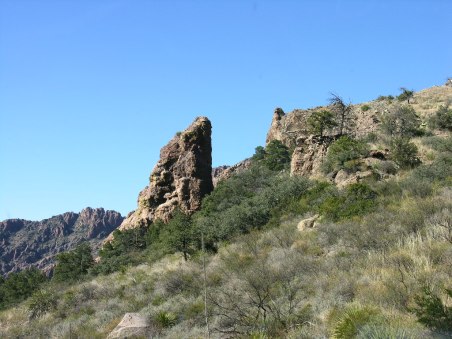