Gee this is the 3rd overcast or rainy day in a row! What happened to my nice Arizona sunshine? Tomorrow it’s supposed to rain again too. I’m having to be very  careful of my battery usage. I got the DVD’s for Season 1 and 2 of Northern Exposure and I want to watch them but I need a pretty good battery charge to run the TV. It’s supposed to be sunny and nice on Christmas Day, maybe I’ll have a Northern Exposure marathon then.

I wanted to make some chili but could only find one small can of tomatoes, so I thought I’d go over to the big metropolis of Blythe, CA to the Albertsons store.  But when I got to the interstate I noticed it was all backed up and barely creeping along in that direction, so I just went to the little convenience store in Ehrenberg, where a 14 oz. can of tomatoes cost me $1.99! Yikes, more than double what I’d pay in a larger grocery store! Oh well, I probably would have spent that much on gas getting to Blythe & back, plus bought other stuff I really don’t need.  I did finally get through to Wal-Mart on the phone to order my prescription refills and have them sent via mail to the Ehrenberg post office.  Their on-line ordering for pickup and/or mail delivery never works! Then on the way back home, I remembered a hidey-hole where I may have put a big can of tomatoes. Sure enough! Oh well; Princess Roxie got a nice little car ride out of the deal.

Ehrenberg is a pretty depressed-looking place. Lots of junky mobile homes & shacks, and businesses-that-used-to-be. They do have a nice new fire station though!

Love the smell here after the rain, and in the early mornings….some kind of bush that puts out a nice herbal smell when wet; I can’t remember which one it is. Maybe mesquite?

Oh! I heard from a friend that she’s going to be camp hosting at the most beautiful campground ever….Sunny Flat, in Southeast AZ near Portal, for January and February! Oh now I’m going to have to go back there. I haven’t seen them since Linda spent a week or so with me at Yuma last winter. Unfortunately it’s about 400 miles from here, but maybe I can work my way back around there by February. I nearly cried when I went past the exit on the way to Whitewater Draw when I first got to AZ; it is such a gorgeous place but it’s way the heck out of the way….something like 45 miles from I-10, in the middle of nowhere. It’s on the “back side” of Chiricahua National Monument, and there’s a little tiny twisty dirt road that goes over the mountain between the two, but it’s impassable in winter, with snow and ice. I tried it last December and had to turn back after a couple slow, bumpy miles. Here’s a photo I got off the web of Sunny Flat. Is that not a magical place? The high cliffs rise all around the campground meadow. It’s a great for birding and there are some nice hiking trails around there. It costs $5 a night with the Geezer Pass. If you get there in January or February, tell Linda and Rodger I said hello! 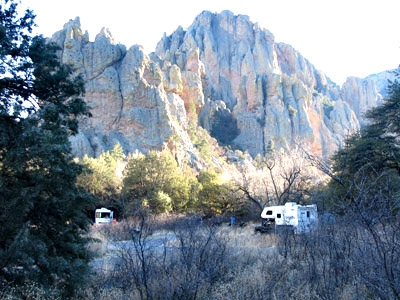 9 replies on “Not A Sunny Day….Again”

Love to hear of your travels. Hope you have a Merry Christmas.

Thanks Rose; same to you!

Merry Christmas! Your blog is so interesting. Is learning all the things about how to full time RV difficult? There is alot to remember it seems. Take care.

Thanks Linda! No, it’s really not difficult as long as you’re equipped for it.

Merry Christmas Janis and Roxie!
Northern Exposure is one of my favorites. Hope it works out for your binge watching.
Linda, Little Man Gus and Lady Echo

Thanks Norman….haha, not a fan of the snakes, eh? Well they’re in hibernation right now, so you’ve got at least a few months before any more snake photos.