I forgot to say that on the way in here initially, I kept hearing something that sounded like metal bouncing or scraping. So I stopped and yep, it was both! The wire holder on one of my propane tanks had lost it’s wingnut and the wire had fallen down and was dragging. I lost the whole wire holder off the other side last winter and it’s just held on with thick string, so that poor tank was bouncing all over the place, and had inched along until it was almost falling off! It’s the one that’s serving  the camper right now; that would have been a nice mess.

We went in to town yesterday morning and got ice, water and a few things at the grocery store (but not what I went in there for). The town of Superior looks a little unloved.

I took Roxie for a walk and saw the biggest cow-patty ever, right behind camp…it was more than a foot in diameter!  I guess this is open range country.  I don’t want to meet whatever made THAT mess! I think it’s a Wooly Mammoth.

I found a really cool rock! It’s a Barnes Conglomerate. Looks like a lot of little stones got caught up in some volcano lava. 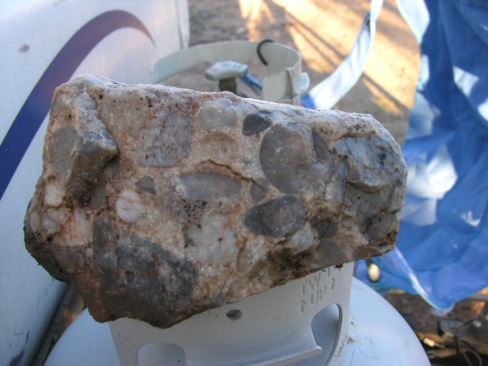 So the Exciting News is, I’m buying  a little over an acre of property  in Apache County, AZ and it has ELECTRICITY!!  (Thank goodness for the Zero Interest, EZ Time Payment Plan) Wow, can you imagine having electricity just any old time you want it?!  And it’s legal to live in a camper there too. The lady at the zoning dept. said I don’t even have to get a septic tank either, they just ask that you don’t dump your raw sewage out on the ground.  ???  Yuck! I’ll probably switch to a composting toilet.  It is 14 miles to a grocery store, but there are a few convenience stores nearby, a gas station, propane fill place and even a nice library!

The kinda bad part is, it’s pretty barren land; elevation around 6335′. It has a few small bushes, but no trees. It has real dirt though, not desert sand. But the big brown electric pole kinda makes up for the lack of greenery.

It’s quite rare to find cheap land around there that’s not completely off-grid. This is right off a county road, and not too far from a paved road. I’d love to have more acreage than that, but there aren’t any neighbors close by so it’s fine. The property taxes are less than $10 a year! It’s on a slight slope but has a level bench towards the back.

I’m working on a plan for maybe building a carport or something but for right now I’ll probably buy one of those heavy duty 10×20 portable shelters and camp.. I’m pretty sure I can get the camper under the shelter; that’ll help as it gets warmer.  At that elevation, there’s definitely 4 seasons, and the summers are not as hot as most other places in AZ. They do get a bit of snow, but on average only 10″. I guess it snows a bit, then goes away a few days later. In fact, there’s a little patch of snow there right now. Not on MY property, but across the road. Pretty nice view, huh? 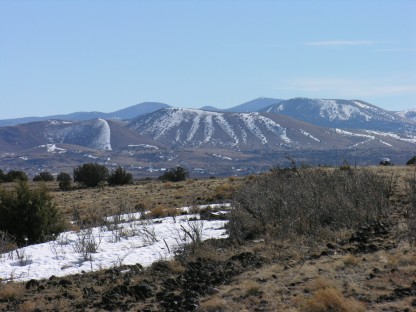 This line of electric poles & easement runs along my property line on the east side, and there’s a sort of track all along it which I think I can use as a driveway!  Those piles of rocks are way towards the back & won’t be in my way. Might be nice to have free rocks! Though I guess I won’t be  messing around the rock pile when the snakes are active.

The road and easement have a lot of these rocks….they look like cinders, what they used to use alongside the railroad tracks! It’s very light.

I have to check this out…it runs along that easement, the whole length of the property. I wonder if I can get city water??? I need to call and find out. I knew it was nearby, but didn’t think it came out this far, so maybe it’s just running along and I can’t tap into it.

It’s still a bit chilly at night there right now but I’ll probably be heading there towards the end of the month. I’m very excited about having my very own place to squat!

Here’s a view in another direction. More mountains, nut its’ hard to see them.

That’s very exciting! So happy for you. Is this anywhere close to Apache Junction, AZ ? We wintered there in the early 2000’s. We presently own a little over one acre in the midwest. An acre.is a pretty good size and should suit your purposes well. I so enjoy reading your posts and seeing your pictures.

Thank you, Audrey! I’d rather not pinpoint where it is, but it’s a ways east of Apache Jct.

So happy for you! Congratulations on your new squatting location! Sounds perfect for you and Roxie. Are there any trees that you could plant that would survive the elements there?

Love your updates and pictures. You’re living the life I wish I could. Look forward to seeing pictures of your setup.

Thanks Vicki! I’m definitely going to look into some fast-growing trees and bushes!

Very happy for you and Roxie! Plenty of room for your rock collection. Enjoy your posts and lovely pictures.
Linda, Gus dog 🐕 and her Ladyship, Echo the parrot 🐦

Thanks Linda! And now that I have a place to dump my rock collection, I find myself picking up even BIGGER rocks, LOL! My poor car.

Congratulations, Janis! I think you have a lovely view. I can see you making quite a nice little spread there, for your itty bitty living!

Thanks Terri! I’m sure going to try!

what amazing news! i am so happy for you two!

forgot to ask, when will you be able to occupy your new land! (and i think you need a name for your “ranchita”. (the rosita ranchita?)

Thanks BJ….I don’t generally name things, but I’ll give it some thought.

Beyond thrilled for you! CONGRATULATIONS!
Add a little water, now you can grow roots!

Thanks Lauren!! I’m pretty excited too. I am starting to feel little sprouts coming out of my feet already. (Eww, that didn’t sound good, did it)

So very happy for you. You’ve earned this. Keep us posted on your progress.

Thanks Donna! See you soon.

Congratulations! That is very exciting news. Looks like you are going to have a wonderful view out your window. We are very happy for you.
You and Roxie stay safe.

So happy! You’ve got gorgeous views and I’m sure your happy to finally have a place! I hope you and Princess Roxie make some great memories there. Here’s to bigger, prettier rocks!

Thanks Denice! Yep, I’m very happy to have a place of my own., after nearly two years of wandering.

You found some land to buy! Wow, congratulations! 😀 No wonder you are on the road again…need to go check out your new view, which is lovely. That’s just the kind of property I was trying to find myself. Glad you got it, someone who appreciates its finer points.
Parker

Thanks Parker…..maybe you can come visit, though your truck might be too heavy until I get some gravel down.

Oh, and vice versa on my property once it gets a road, too. Yeah, my truck is super heavy!

That is exciting news. An acre is not a bad size…and electricity wow!