Jeanne, Joanne, the dogs and I set out for Bandelier National Monument on Sunday. We did not realize it was one of the free entrance days….what a crowd! There were hardly any parking places open and people were everywhere. Plenty of beautiful scenery on the way there, and inside the park. The “good stuff” is only seen by hiking at least 1/2 mile, which I was unable to do, so some of the photos are courtesy of Joanne Jarrett.

Dogs are not allowed on the trails so we tried to leave them in the car so I could TRY to do part of the hike, but Roxie just won’t shut up in someone else’s car (and Lord knows, there’s no room in my car for passengers!). We had a windshield foil thing up, windows part way down and it was NOT a hot day, but with her barking her head off, people were muttering about the poor dog in a hot car so I sat in the car and waited for J&J to do the 1.2 mile hike, so Miss Mouth would be quiet. 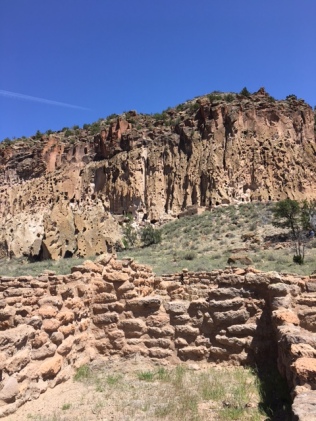 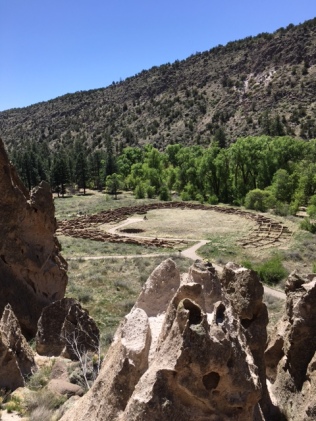 When they returned we were really hungry so we went to the tiny snack bar in the gift shop. They had a soft-serve ice cream machine but it seemed there was only one person working the whole gift shop, so Jeanne applied her Dairy Queen experience and got us all cones, and when she went to pay for them, she got yelled at for doing it. We didn’t care.

On the way home we stopped at Red Lobster for an early dinner…yum! Again we put the foil in the windshield and rolled the windows down quite a bit. It was even cooler by then but someone complained to the management about the poor doggie in the hot car. They think just because she’s barking, it means she’s too hot. So when we stopped at Wal-Mart, I didn’t even bother to try and go in the store, I just stayed in the car with the dogs.  I really hate that my life is controlled by a less-then-ten-pound-dog!

I started taking antibiotics for my toothache and it’s feeling much better.