I am growing celery from the end of a grocery store bunch or organic celery! I cut about an inch off the end and stuck it in a little dish with water, and changed the water every day and look how cute! After only  6 days, new celery is growing! I suspect it’ll take forever to get actual new stalks, but I don’t mind using little baby-stalks. It will be nice to be able to harvest what I need without killing the plant, as I tend to throw a lot of celery away; it goes bad before I can use up a whole bunch of it. I need to plant it in dirt pretty soon. I read that you bury the whole thing up to where the new growth is coming out. 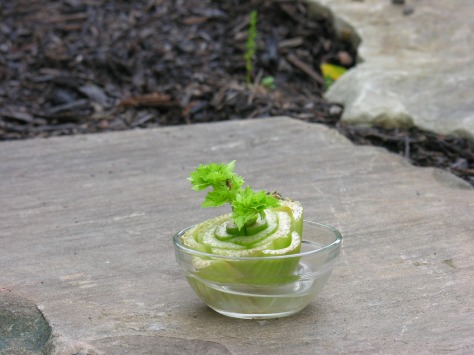 And I also have another green pepper plant. I hope she does better than last year’s pepper who rejected her child when it was only an inch or so grown. I really wanted to have a lot of container veggies but since it’s so uncertain how long I’ll be here, I decided I’d better not. I think Celery and Pepper could travel with me if I have to leave.

I’ve discovered even more competition for those strawberries….apparently the squirrels really like strawberries too! They are nasty about it…they pick a berry and bring it up to a rock or onto the gravel drive, and then they eat about half of it and leave the rest there to taunt me. There are half-eaten strawberries all over the place! So far I’ve only gotten two berries that are kinda-sorta ripe. Obviously I can’t wait for them to ripen, or they’ll be gobbled up by all the competition.  I am the sole owner of the blueberries though, and I harvested a small handful the other day and had them in my yogurt. They are FAR superior to those flavorless grocery store blueberries!

“Ahh, but the strawberries—that’s where I had them.” Captain Queeg, The Caine Mutiny. I love the strawberry tales. So innocent, funny, they simply pull me in. Thanks

Celery will keep quite a long time when you wrap it in aluminum foil. Mine is still fine after three weeks or more.

You’re right, the foil really does help! That’s what I do, but I still usually end up throwing some out.