We have been at Saratoga, WY for the past few days. Nice little town; MUCH larger than Centennial! I was able to do laundry and stock up on groceries. The IGA grocery here cuts all their own meats and their pork chops are to die for….best I’ve ever had, I believe!  They even have Prime beef, which of course I can’t afford, but I bet it’s good. 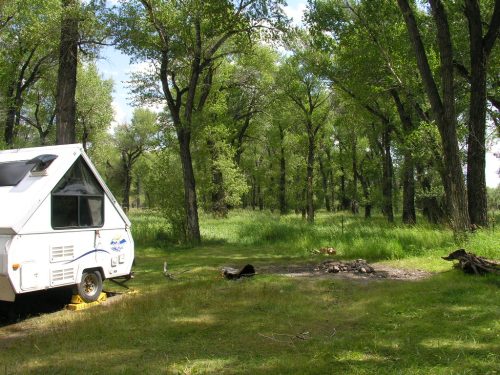 I think it has rained all but two days in the past 2 weeks! Sometimes just a few drops but we’ve also had some real deluges. The day after I got here we had a big rain that made the camper a little island in a big pond! When I stepped out the door I was in ankle-deep water for a couple days. But the temps have been great; mid-70’s daytime and high 40’s, low 50’s at night so I don’t need to use the heater.  This is a grassland area but there are plenty of shady trees near the river. I can’t see the river from here but we are only about 50’ away, with a little path that goes down to the gravel beach and river. 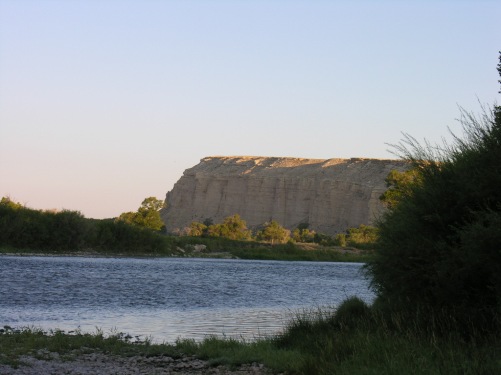 Yesterday I went to the Saratoga Hot Springs (also known as the Hobo Hot Springs). It’s free and open 24/7! With free showers too, but the showers have no doors so I certainly would not use them. The changing room is all open and the bathroom stalls didn’t have doors either…..not my kind of place. A little privacy, please!! I had checked it out the day before so I knew to come with my bathing suit already on. The springs were great! There are 3 pools. A Not-So-Not pool, the regular 106᷾༠ pool, and The Lobster Pot, a bone-melting 120 degrees! I went early in the morning and there were just a few locals there. I was told that the indians thought the hot springs could cure anything until the Smallpox epidemic, then they lost faith in it. They gave the springs to the white settlers, with the caveat that the springs always be open and free to everyone.  I guess this is one of the few instances where the white man kept his promises!

There are some mule deer that drink at the river in the early mornings, then pass through camp. I’ve tried to get photos with not much luck, though I did get one of a fawn the other day. Then yesterday when I went to the hot springs (without my camera) there were two magnificent 6- and 8-point bucks just casually munching the bushes at someone’s house in town!  Figures.

I’ve had some problems with mice getting into my car again so I set a trap and caught one. I reset the trip and haven’t caught anything so maybe that was the only one. I hope so! My car is so crammed full of stuff, it would be really hard to find a nest, if there is one.

Thank you again (and again) for using my Amazon Associates link to order your goodies from Amazon! I get a small percentage of each purchase and it doesn’t cost you anything extra. The earnings I get from Amazon REALLY help supplement my Social Security! Here it is:  www.amazon.com/?tag=litbitliv01-20 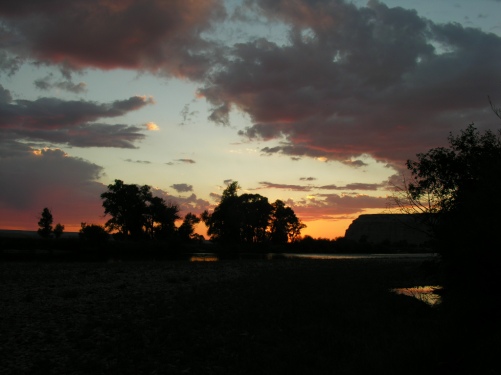 Love your camp site. Too bad the weather hasn’t been better. Stay safe!!!

Thanks Nancy, it’s really nice here. The rain doesn’t bother me much…..I have plenty to read!

Looks like a lovely spot to spend some quiet time. The weather has been pretty much the same up here rain, rain, and more rain. I do not remember there ever being a summer with so much rain. I am surprised we do not have more mosquitoes. Continue to be safe.

Oh gosh, I guess I’m glad I came out here instead then! Here it often just rains long enough for me to put away the lawn chairs, Roxie’s bed, etc. and then as soon as I’m done, so is the rain!