Wow! By the end of the second day, the shed was complete! Three guys, 1 1/2 days, done! I liked how the windows looked before they were installed but now I’m not happy. It’s not anything I can remedy though, so I’ll suck it up and deal with it. I wanted 24×36 single hung windows and these are 3×3 sliders, due to a last-minute problem with the windows they ordered. (They came in with frosted glass!) I really think they are too big for the size of the wall. Not to mention, now I don’t have any space left for wall cabinets in the kitchen, and there may not be enough space between the door and window for the propane heater. I had it all planned soooo carefully! Sigh. OK. I’m just going to go with the flow. Really. Soon. 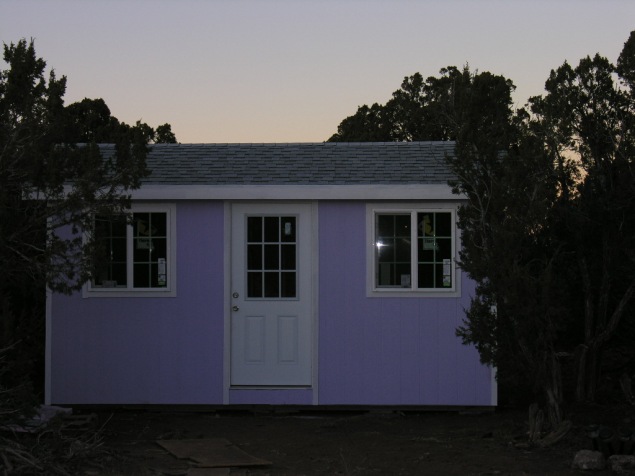 I do love the color! Yes, it’s lavender! (Behr Foxglove, to be exact). I never thought I had a single girly-girl gene in me but apparently there was one hiding somewhere. I have to build shutters and windowboxes and they’ll be painted deep purple, along with the door, or maybe I’ll leave the door white. I’ll paint the other stuff first and see how it looks.  I think it’ll be great! I’ve been thinking about this color combination for a couple years now.

I keep coming up with things that have to be done before insulation, when all I want to do is get it insulated and move in!! But first I have to build the studwalls for the bathroom, closet and a short 2′ wall between the door and the end of the kitchen counter. And then I have to run the wiring.  And I woke up out of a sound sleep at 4 a.m. and remembered that I also have to run the plumbing before I insulate! Gad, it’s going to be MONTHS before I can move. I don’t plan on getting a water heater right now but I guess I’d better plumb for hot and cold water at the sink & shower. I can get a little propane instant hot water heater for around $100 on ebay, and it would be nice to have someday.

I ran into another problem, with the propane heat. I had planned on getting one of those vent-free propane wall heaters for around $120. Well. Thank goodness I found out before I bought one and installed it….they don’t work at higher elevations! Some are only good to 2000′, some are good to 4500′ but for my elevation here (6700′) I seem to only have two choices….a direct-vent heater that’s way bigger than I need for $500-600, or another Olympian Wave heater like I have and love in the camper, only bigger. They are good to 12,000′.  The problem with the vent-free heaters is that they now have those low-oxygen sensors and at higher elevation, there’s less oxygen so it shuts itself down all the time! So I guess I’ll be going with the Olympian Wave 8 heater like this: http://amzn.to/2AZJ4VH (Affiliate Link). It has 3 settings; 4200, 6000 and 8000 btu. I was hoping to get a heater that had a thermostat but this will be OK; I get up once or twice a night anyway and can adjust it then, if needed. Hate to have to pay $300 instead of $120 though. That’s one whole month’s construction budget, and I’ll have to have it before I move in, unless Spring arrives before I get everything else done!

Yesterday I went to town and ran a bunch of errands. It’s so exhausting! But I got some terrific bargains at the thrift shops! I got a big bag of 16 electrical switches, one dimmer and one outlet $3 at one thrift store, plus 4 juice glasses and 2 large drinking glasses for $.25 each. The second thrift store was having a “yard sale” and everything in their outdoor area was 1/2 price! I got all the switch & outlet plates I need for $1.50, a brand new still-in-the-box smoke alarm for $1, a pine coffee table for $5, and a sofa sleeper for $37.50! Yeah..I bought a sofa. I have to rent a trailer and go back on Tuesday to pick it up. And I know it’s going to be in the way while I’m trying to work on the house, but I couldn’t resist. The upholstery is in great shape but it’s that old 80’s navy, burgundy & green plaid. I’ve been reading up on fabric painting with Chalked Paint and apparently it will cover anything, and the fabric feels fairly soft afterward, so I’ll probably try that. If that doesn’t work, maybe a slipcover.  http://amzn.to/2CPv9is

I don’t want a coffee table but this one has 2 very nice slabs of butcher block wood that I can use for another project I have in mind.  I just have to take it apart and sand them a little. Maybe I can even find a use for the two Shaker-style ends. It says “Made in Vietnam” so I have no idea what kind of wood it is; it has that yellowish Pine color. I’ll probably whitewash it to tone down the yellow. The top is 20″x40″ and the bottom shelf is 16″x36″. Solid wood pieces like this would have cost more than $30 at Home Depot! 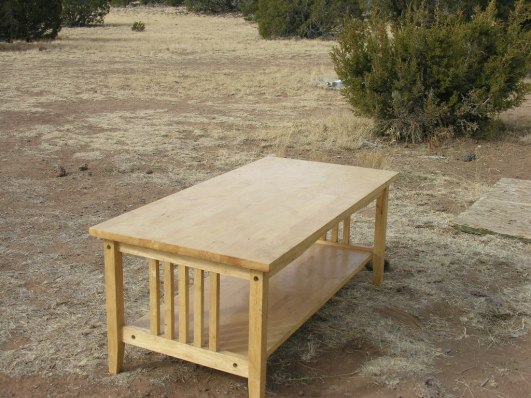 Great job at the thrift store! And I understand your frustration….now that your little home is there….you just want to move in! But, at least it’s where you can easily work on it day by day and see some progress in “real-time” not just in your dreams. Have fun and Merry Christmas! MB

Thanks MB! Yeah, I just want to skip over to the decorating part.

I’m thinking a green a bit darker than mint for the door. Best luck on all your work!

Sue, I think if I went green it’d be that light apple green.

You have so many wonderful, creative ideas. You’re having such a fun time planning, finding, replanning. It’s your home!

Thanks Marilyn…..yes, I like the planning part; it’s the DOING that’s hard!

What a cute little house! I love the lavender. Aren’t thrift stores great?! Such a lot of bargains you got. Congrats on getting things set up on the outside.

What a great little house…love, love, love the lavender. It sounds like you have some great and cozy plans to make it a wonderful home. Looking forward to reading about and seeing pictures of your progress.

Congrats! It looks great so far.