Before I tell you about my bad week, here’s the current photo of the house! Maybe I should call is “Casa Morada” (Purple House).  When I first moved to Ecuador, I rented a place called The Purple House! But mine is much cuter. It seemed to take forever do get each thing done; partly because that dark color took a coat of primer plus FOUR coats of paint! With an hour to dry between each coat. I still need to paint the door but I’m searching for the perfect color.

I finally cooked that free turkey from the Food Bank that I got before Christmas, on my little Weber Q2200 grill. I nested three disposable lasagna pans from the Dollar Tree (2/$100) and put little rolled-up balls of aluminum foil between the first and second pans, to insulate the bottom from the worst of the heat.  Plopped Mr. Turkey in, basted it with butter and then had to deal with the grill lid. The turkey was too big to be able to close the grill lid, so I propped it open with a stick and rigged up a larger hood with heavy duty foil. And had to use sticks to make it stay in place!  Good thing it wasn’t a windy day.

Even with the foil lid, I lost a lot of heat and could only keep it at 275 °, but it cooked just fine in about 2 1/2 hours, and came out looking beautiful! 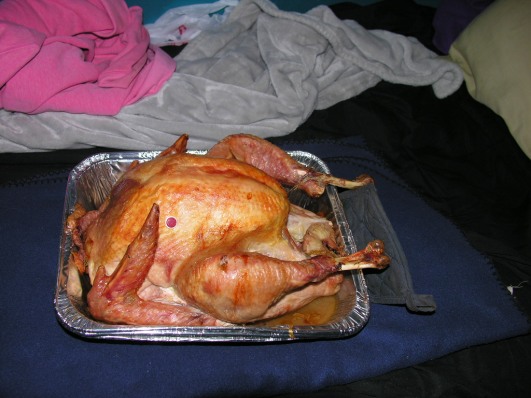 And yes, it’s sitting on my bed! That’s the only place in here that was large enough. It was very tasty…moist and juicy! Five days later Roxie and I are still eating it, but tonight’s dinner will see the end of it. It was good but I’m so glad it’s gone!

So..the bad stuff. Really, I was lucky; it could have been so much worse! But I don’t know if I’m too tired, too old, careless, or just have a death wish.  First off, you know those big 25′ metal tape measures that whirl back into the case? Did you know that if you accidentally get your finger in the way, it makes the biggest, deepest paper cut ever? Yes. It does. That’s what started it off. A couple days later, I stuck my ring finger in the circular saw! I was cutting a very small piece of 1×6 and there wasn’t much room to hold it. I felt it bite and jerked my hand away and was sooo afraid to look! But it was just the tiniest cut, way smaller than the measuring tape cut. I could barely squeeze out a drop of blood. Boy, was that lucky! (Stupid, but lucky) Here’s my circular saw injury. Pardon all the paint.

Then the third thing. Bad things come in threes, right? So I should be good to go now for a long time. The other day I went around the back of the bushes to rearrange the solar fairy lights. Coming back out, my foot got caught on a root and I fell like a giant oak…right on my face in the dirt! It’s a wonder the neighbors didn’t report feeling an earthquake, and I’m just lucky I didn’t hit my face or head on the tree roots or pallets that were right in my path.  I skinned both knees a little bit, got a giant bruise on the side of one knee (must have hit something besides the dirt), smashed my nose and the nosepiece of my glasses pushed into the bridge of my nose real hard…had an instant bruise there that later spread to 2 black eyes, but only a little, just in the inner corners so it doesn’t look awful. And a little gash on the back of my hand. The BACK of my hand??? Yeah…those hands….where WERE they when they should have been breaking my fall???  Apparently they were just dangling at my sides.

I got up real quick, you know how you do, in case someone is looking you have to pretend you’re OK, ha ha! I hobbled right in and put the homeopathic Arnica gel on all the hurts; already had a hand-sized bruise coming up on the inside fat part of my knee. It really works good…I ended up with just a bruise along the edges of that one, no bruises on my nose and just that little bit in the inside corners of each eye. But boy the next day I felt like I’d been run over by a bus!  Even those useless do-nothing arms had the audacity to hurt! Strangely enough, my glasses didn’t even get scratched. Good ol’ $50 Zenni mail-order glasses!

So that’s pretty much my week. Here’s hoping this next week goes a lot smoother, and involves less Band-Aids and Arnica.

This entry was posted in Arizona, Uncategorized and tagged Shed to Tiny House, Tiny Home, Tiny House. Bookmark the permalink.

9 Responses to Calamity Janis at Work