I’ve picked up a very bad habit…..I’ve been getting up at 5:30 every morning! All through my working life, all I wanted was to be able to sleep in until 8:00 and now that I can, I can’t! I’m pretty sure it’s because there are too many thoughts whirling around inside my head, and I’m hoping that if things ever settle down, I’ll be able to sleep later. But another problem is that I’m “training” Roxie to get up at 5:30 also, so she probably won’t allow me to sleep much later than that. Some mornings when I might have slept later, she insists that she MUST go out at the crack of dawn. I’ve tried getting up and taking her out, then going back to sleep but it just doesn’t work. I’m wide awake by then, Perhaps I should get blackout curtains for the house.

Here’s this morning’s sunrise. It was actually much prettier than this.

I borrowed my neighbors’ trailer and picked up the materials for the house floor on Wednesday.. Sticker Shock and Reality Check! I had figured it would cost about $300. It actually cost $395, plus I just bought another $31 worth yesterday! That includes insulation. I had not bothered to figure costs for what I considered to be “incidentals”, and those incidentals really add up in a hurry! A small box of nails is over $4; a small box of screws is nearly $9 ($.10 each!), the hardware cloth that goes all over the underside of the floor joists to keep out mice & rats was almost $60, and there was $40 in sales tax! $400+ just for this teeny weeny  8×8′ floor?! This is gonna be a big problem down the line somewhere, as I only had a little bit in savings, plus the little bit that’s left from my monthly Social Security payments, to build this house.  I’ll just have to go as far as I can until the money runs out, then wait for the next SS check. I fear this is going to take me well into hot weather though, and I really was trying to avoid that, as I’m extremely sensitive to heat.

I let the nice helpful boys at Lowes help me pick out all the 2×6’s, a mistake I will never make again! They are terrible….nearly all of them are twisted or curved or both. Lesson learned.  That first day I hardly did anything but hammer nails in and then remove them, for one reason or another, but the second day went much better. And I’ve become an expert at removing 16-penny nails. It’s been so long since I built anything, I’ve forgotten a lot of the basics. Like measuring everything that comes from the lumberyard. I stupidly assumed an 8′ board would be 8′ long. Nope, one of mine was 1/2″ too long! If i’d used it, I never would have been able to get the floor squared. Most of the boards were “pre-cut” and were $1.50 cheaper than the full 8′ long, and since I’d have to cut them anyway, it seemed like the thing to get. I asked the guys at Lowes, if I use a pre-cut with a 2-by at each end, does that equal 8′? And they both said yes. Not true, because pre-cuts are meant for making 8′ walls which have a bottom plate and TWO top plates.  Wish I’d remembered that in the store.  So my house is 1″ narrower than I wanted. Seems a small thing, but that’s OK in one direction but not the other; I’m going to have a hard time fitting everything into that 8′ wall as it is; an inch less would be impossible.  Plus now I’m going to have to cut the subfloor sheathing instead of it fitting perfectly onto my 8×8′ square. Not a huge deal, just one more thing I have to get right.

So here’s my floor foundation. Boy, that sure does look tiny! Technically this is not going to be a Tiny House, it’s a Micro House. I think anything under 100 sq. ft. is considered Micro. 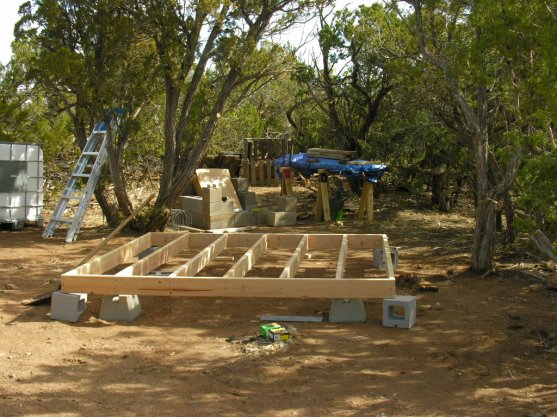 And here’s my solution to the wind problem and raising seedlings….the car makes a great little greenhouse! I can regulate the amount of heat by opening or closing the windows on the side away from the wind. Whether or not these baby plants will ever make into a garden is up in the air, but we’ve got a pretty good start. I really want to have a garden; there’s just a lot of more important stuff going on right now, plus I hate to spend the money for materials to make raised beds and all the dirt to fill them. I’d thought about straw bale gardening but the straw is $10 a bale here, and they’re only good for one season.

MANY THANKS to everyone who has “donated to the cause”! (Links at upper right) Every penny helps!

Here are some of the items that readers have purchased through my link recently. Please feel free to use any of these links to search for other items to purchase! I get a small commission on each item, and it doesn’t cost you anything extra.

7 Responses to It’s a house!