I don’t know when I’ll get this out, since I don’t have internet here and I’m a little bit snowed in at the moment! What crazy weather we’re having! Mother Nature’s off her meds!

We got 4” of snow starting Christmas afternoon. Two days later we got another 4”, then another 2” during the night. Then on New Years Eve we got a whopping 17” on top of that followed by a couple more inches the next two nights.  30” of snow in 9 days. My car hasn’t moved for over a week. The snowplow came through three days after the biggest snow, and I ran the car up & down the driveway several times to pack down a “path”. The snowplow dug deep and left a 2’ high berm across the driveway, which contained a foot of snow and a foot of gravel! It was really hard work to get that shoveled away. I threw the gravel onto my driveway, since the county obviously wants me to have it, right?  (The driveway is just a two-track path right now; no gravel) I’m going out for more propane and some groceries today. I don’t think I’ll go all the way to Show Low though, I’ll do my grocery shopping at Dollar General and the local convenience store. It’ll cost more but I’ll save almost $8 in gas by not driving that 60 miles to town & back. 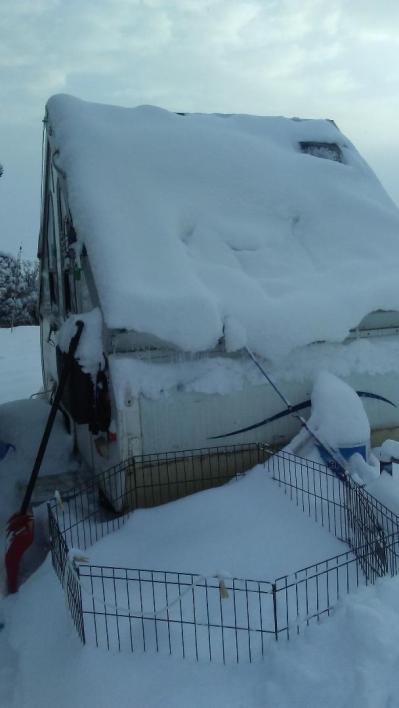 I was in good shape for food & water, just short on meat but I got through it. Yesterday I made tuna-noodle casserole on the stovetop and it was really good! I wonder if there are other casseroles that don’t really need to be baked…..any ideas?

Earlier this winter I read that it’s an El Nino year and that the winter in AZ should be warmer and wetter. I just found out, that’s only in extreme western AZ. Here, colder and wetter, as I’ve already seen. In addition to the snow we’re having extreme cold temps…lows in the single digits and low teens, and highs in the 20’s and low 30’s.  Thank goodness we’re getting some sunny days. If it’s sunny, no matter how cold it is outside I can turn off the heater and let the sun warm the camper.

Got this on my phone the other morning….!!!  My neighbor says it was not that cold and frankly, I didn’t think it felt that cold, but it sure was shocking to see that come up on the phone! 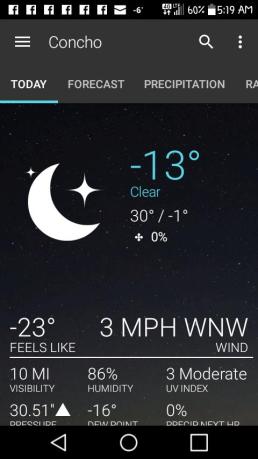 All the canned goods I was carrying in the car got moved to….you guessed it, my bed. The watermelons have been eaten but there’s also several cans of Great Stuff,  some spray cans of Thompson Water Seal and a couple tubes of construction glue sharing my bedspace. Did I mention that the bed is only 34” wide? I thought I cleared everything freezable out of the car except the gallon water jugs, but I forgot about a glass water bottle in the console, which froze and burst. What a mess! It was frozen in place and I had to wait til a nice sunny day to get it out of there. I wonder about the canned goods in the storage unit; I’m sure they frozen but I hope they didn’t burst. Of course all the plastic gallon water jugs are frozen solid. When I need water  I just bring one in and it thaws in about three days.

The extreme cold brought a new problem with my very fragile door. It would get heavy frost on the hinge side of the door and actually freeze the door in place. When I’d try to open it, the casing around the door would stay frozen in place but the door itself would pull away! Then the door wouldn’t close again without having to hammer it back into the frame, which means the door stays open for fairly long periods of time while I get it back to the point where it will close, and I lose a lot of heat. I’m sure all this whacking with a hammer is not doing the door any good, either. I just don’t know how to fix it.

The floors are horrible. There’s no insulation in the floor plus with the door all wonky, there’s a  gap at the bottom. I fill it in with a foam strip every time I come in plus put a rolled-up towel across the bottom but my shoes actually freeze to the floor in front of the door, and when I tried to pick up Roxie’s bed the other day, it was frozen to the floor, and it’s 3’ away from the door and around a corner!  I do kinda enjoy having an indoor refrigerator again though, instead of having to use the ice chest in the car. The cheese, eggs & veggies are in the broken refrigerator, which is staying nicely cold in this weather. The milk, coffee cream, leftovers, etc. are positioned near the door where they often are frozen in the mornings, but it doesn’t seem to hurt them.  So convenient!

I’ve been having to use a stove burner to supplement my little Olympian Wave 3 heater. It’s a great heater but 3000 btu’s is just not enough to combat this extreme cold and frozen floors. Lucky for me, there are so many wind leaks in this thing that I don’t have to open a window for ventilation….the gaps around the door & various other places provides plenty of oxygen.

It looks like there’s another storm system coming in on Saturday night. One of my weather apps says possible 4-6” of snow here and the other one says no accumulation. I never know what to believe. The temps are supposed to warm up mid-week and be in the 40’s / 20’s! That’ll probably feel like summer!

So needless to say, no work is being done on the house. I keep shoveling the snow off the tarp-covered floor and I’m ready and willing to start building roof trusses and studwalls but Mother Nature is not being very accomodating. 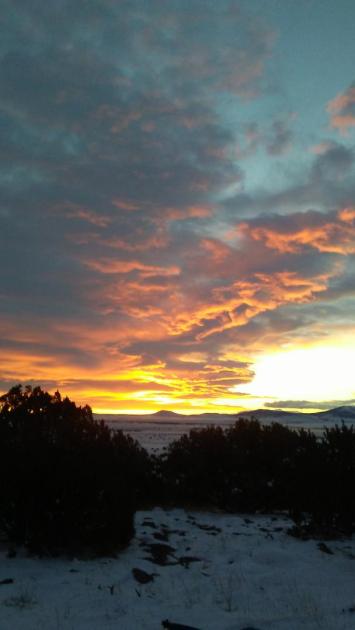 Pretty Sunrise while waiting for the snow!

Here is a link to an Amazon product…..you can use this link to access Amazon and then order anything you want. Thank you!