First I want to send a big THANK YOU to the folks who donated money to the “cause”!!  I love you guys! I was able to buy about half of the insulation I need for the walls, and I bought a used 245 watt solar panel for only $95, and I paid Tyler to come and help me install the roof insulation. Yeah, I know; why do I keep inviting him back and then complain about the work he does? Well, because he’s the only person I know to call.  He brought a new helper this time, a guy who was actually a really good worker! And he had all his front teeth so maybe he wasn’t a meth-head like Tyler and his other helpers.  It took most of the day to cut and fit the foam between the roof rafters. What a nasty job! The 4″ styrofoam had a layer of fiberglass cloth stuff on the outside. Some had it on one side only and some had it on both. We found that the best way to cut the 4×8 sheets was to use the sawz-all, which kicked up a lot of fine fiberglass and foam dust that stuck to our clothes and skin. With the low humidity here, we are all just giant static cling machines. UGH!! Nothing worked to brush that stuff off us. That was one day I really wished I had an indoor shower! It was much too cold to shower outside. I washed off with a washcloth but it wasn’t nearly as good as a cascade of water.  Anyway it’s done, with a bunch of gaps and cracks that I now need to fill in with Great Stuff foam. I got some Great Stuff Pro foam and gun which is supposed to be much easier than using it out of the aerosol cans. With the gun you have much better control plus when you stop pressing the trigger, the foam stops coming out immediately. With the aerosol cans, it just keeps drooling out for several minutes after you want it to stop!

But first my neck has to recover a bit; I’ve had neck pain for more than a year and looking up at the roof all day really aggravated it.

Here’s the insulated roof! Yeah it looks crummy because it was used stuff and then it sat out in the weather for 6 months.

Oh yeah…my brain tumor! Well the neurologist said it’s nothing dire; we’re just going to wait and watch it for now. He said it did not cause the speech problems; he said those were just because I’m OLD! (At least he didn’t call me Elderly) I’m puzzled by that; I know lots of old people and none of them have intermittent speech defects without any underlying cause like a stroke. I might get a second opinion if the speech problems crop up again, but really, I’ve about had it with driving 4 hours each way to Phoenix to see specialists.

Yesterday Tyler came back and after much discussion we figured out the best way to install my shower pan. I did not want to cut holes in the floor, as that would involve messing around with the continuous mouse-proofing hardware cloth that’s stretched over the bottom of all the floor joists. So we made a fake floor riser just high enough for the drain assembly to be installed; ran the drain hose to an outside connector with a garden hose connection. I’ll be able to drain the shower water into a bucket, portable RV waste tank or just run it into a hose to water the trees.  Next I need to build the stud walls around the shower, and build a flat ceiling in the bed/dining/living room area.

Here’s a photo of the shower pan. Note that the shower pan IS the whole bathroom floor! I’ll step up into the shower for all bathroom activities. It is 24×40″ and it actually is larger than a friend’s camper bathroom, so I guess it’s workable. Heh heh…good thing I lost all that weight! The old Me probably would not have fit in there at all. I never wanted a “wet bath” but I just didn’t have space for a separate shower.  My bucket toilet is going to take up half of the bathroom! I can remove it when I want to take a shower. One of these days I’ll build a “dry” toilet that’s smaller than a 5 gallon bucket. I ended up with a 9″ step up from the main floor, over the lip of the shower pan and then a 5″ drop down into the pan, which is a bit much but I think it’s do-able. Maybe I’ll put a grab bar at the doorway to help the ELDERLY.   I was afraid it was going to end up even higher, and it would be like trying to step into a bathtub every time I need to pee! So this is better. Really!

I got a cute little tiny wooden heart at a thrift store, it’s perfect for my tiny door!

Two friends are coming this weekend to help install the foam insulation in the walls! It will take 3 layers to fill the 2×4 cavities…two 1 1/2″ layers plus a 1/2″ layer. Triple the work! I bought enough to fully insulate the little bed/living/dining section and enough for      1 1/2″ in all the other walls. That should be enough to make it through the winter; I’ll need to finish it up before the summer heat hits though.

Look at the darling fabric basket my friend Tam Milostan made me! The inside fabric is little pink piggies….too cute!

The other night Jack Frost was really hard at work! Am I the only who sees a beer bottle in the upper right corner? What is Jack trying to tell me?? (It’s actually where the frost started to melt)

My hydroponic veggies are doing well. I mean they’re still alive. The bok choy has started to really take off but the lettuces are very slow. I am still holding out hope for them though. 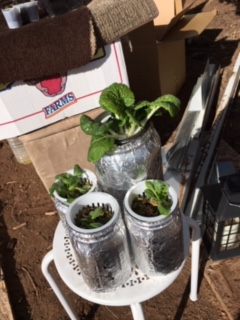 I guess this is Apache County’s version of repaving the roads. We’re poor, you know! The road has lots of cracks in it so they went along and sprayed hot tar on the cracks. I guess that will keep the moisture out of the cracks so the frost doesn’t get in there and expand them, but I’ve never seen that done before! 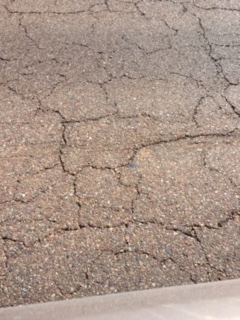 11 replies on “Getting Closer!”

Wow! You are moving right along!

Maybe you could build a small box shape with 2″x4″s with a hinged top of 3/4 or 1″ plywood to use as both a step and a storage box in front of the bathroom door.

Robin, I’ve thought about that but the kitchen counter is only 54″ long and must contain the stove and sink plus some work space. A step would end up right in front of the stove and that would be a huge hazard…more dangerous than stepping up into the shower, LOL!

Congratulations on all that work getting done! Stay warm, lady. ☺️

Thanks! I’m trying to!

WOW you have gotten lots done. If Tyler works cheap I guess you have to use him. Lets just hope he stays clean for the rest of the project. I’m happy the unsulation is getting done so you can have some warmth. The little heart is adorable and I love the basket your friend made. Oh I just noticed you even have curtians in the windows cool. The road looks like a huge gator, but that’s how they fix the roads here LOL
Well the Dr. seems to think your fine, but I’m with you on the speech thing. Lets just hope it doesn’t happen anymore.

Thanks Jo! Oh is that a common way to fix roads in AZ? I’ve never seen it…I thought it was just because Apache County is so poor and couldn’t afford to repave it!

yeah they do that to the farm roads in texas too. haven’t seen that in a coons age (as my texas grandfather would say)

I don’t think I’ve ever seen that done, anywhere.

Wow! I am way behind in your adventures. Glad you are making some progress on the house, sorry about the medical issues. Hugs!!