Last week I had some excellent helpers come to visit! Tom Warfield and Donna Morey are both fellow members of the AZ A-Frame Campers group (same kind of camper I have).  Boy, did we get a lot done! Tom can do ANYTHING, and he does it well, which was a nice surprise after Tyler’s work.

Donna arrived on Wednesday and right away there was a problem with her battery system. That’s bad when you’re boondocking!  I loaned her my Buddy heater and a couple 1# propane cylinders for the night. I’m glad I picked it and a smaller Coleman SportCat heater up from the storage unit! Then around 9 pm that first night, I ran out of propane and went out to change the tank. I got it all hooked up and SSSSSSSS! The hose had developed a bad leak.  So I went without heat that night. I could have gone and gotten one of the propane cylinders from Donna but then her heater would have run out and she’d be cold. I figured I’m probably more used to the cold than her, so I toughed it out. It wasn’t too bad; I think it was 43 inside the camper in the morning. I had gotten a spare comforter out of  the car and I just kept under the covers and I actually slept better than I usually do!  Good to know, but I really don’t think I care to trade good sleep for warmth. The next night I used the little SportCat heater. It only puts out 1500 btu’s but kept the camper at 54 degrees, not too bad.  Friday my friend Jeff Cox went to town and he brought me back a new propane pigtail.

Tom arrived on Thursday and right away went to work diagnosing Donna’s battery problem (a bad converter). He bypassed something-or-other and made it so Donna would have power for heat at night, and each day he charged her battery with his generator. He also repaired my camper door that kept trying to fall off! It was coming out of the C-channel frame so he used pop rivets and a metal plate to hold it all together. When the new propane pigtail arrived, Tom installed that too. What a handy guy!

Donna and I worked on insulating the bedroom/dining/living room area. That was probably the hardest place in the house to do, as by the time I got to that studwall I was nearly out of 2×4’s, so I used some that were really badly bowed and/or twisted. So cutting rigid foam insulation to fit the bowed studs was a real adventure. And we needed 3 layers in there to fill the cavities: two 1.5″ and one .5″ thicknesses.  Tom set about with the Great Stuff Pro gun and ran a bead of foam along every rafter and filling all the gaps. They call that “poor man’s blown in foam” because it makes an airtight seal. Boy the Great Stuff Pro gun works SO much better than those nasty aerosol cans! You have way more control over the size of the stream, and when you let up on the trigger, it stops coming out, unlike the aerosols that keep drooling out foam for 5 minutes afterward.

I have NO idea why Tom looks like a giant and I look like a dwarf in this photo! He’s not THAT tall, and I’m not THAT short!!

Here I am, working hard! Rasping off a piece of styrofoam to fit the wall cavity better.

It’s hard to tell but I am completely covered with white foam dust!

The next day Tom installed the two vents in the back of the house for the refrigerator. That’s something I’d have been scared to do; cut into the house wall!  He drilled holes for the wiring and also pulled all the rough wiring. Got my wall bed built with his engineering brain figuring out how to accomplish what I wanted, and finished installing the deadbolt lock on the door. We built the drop ceiling for the bedroom area, and he wired a new 7-way camper plug on my car! The cover on the old one had broken, it was falling off and the plug receptacle part was so full of mud, it never would have worked again!  I think that might be all. ALL!  I was thrilled with how much got accomplished in one week!

Wiring! In this one you can also see where the orange foam has been applied to the roof seams, and also where the fridge vents cut-outs are. We covered them back up so it’s not so cold inside, since I’m not ready to install the fridge yet. 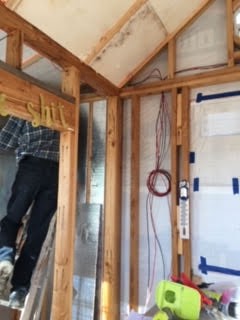 So here’s the living room setup. Notice the wall bed. It will be disguised with nice pine paneling later. 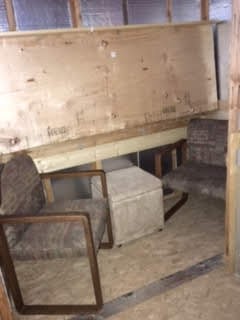 The bed base extends 7.5″ out from the wall (because my mattress is 7″ thick) and there will be a shallow bookcase under that behind the chairs, against the back wall. It will have a small drop-down dining/game table that will go between the chairs. When the bed is lowered, it just clears the top of the chair backs. With the mattress on, it is 40″ from the floor, so I can easily climb up on my little 2-step ladder, though I will be making (hopefully) a clever end table that converts into steps at night. The wood on the wall is what I’ll use to finish all the walls in that room.  The TV will be mounted on the wall above the bed. 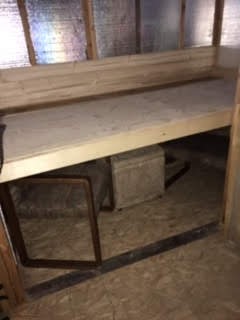 I have discovered something wonderful! Keto Pizza! It’s not as good as pizza with a real crust, but to someone whose lips haven’t touched pizza for 9 months, it’s fantastic! No, not one of those nasty cauliflower crusts, either. I don’t eat things that look like cancer. The crust is made of mozzarella cheese! You let that melt together, then add the pizza sauce and whatever else you like (for me, it’s bell peppers and pepperoni) and more cheese on top. I like to use whole milk mozzarella but I found out that was a big mistake. It’s way too wet. I was blotting and blotting the liquid that oozed out! It’s better to use part skim mozz or provolone for the crust at least. I make it in my tiny 4″ egg frypan and it’s the perfect size.  I’ve been eating a lot of it lately…..I’ve gotten into a rut and tend to eat the same things over and over, so this is a wonderful change, and when I do a finger-stick 2 hours afterward, my glucose is never over 100 after eating this and a salad. Tonight it was 79! Intermittent Fasting has actually cured my Insulin Resistance, but that’s a story for another time.

I’m down 72 pounds! Very nearly two full 20# propane tanks’ worth of weight….a full tank weighs 37#. Can you imagine toting around two of those suckers 24/7?!! Wow. That’s a lot. People are starting to bug me about being “thin enough” but I think they’re just not used to seeing me at a normal weight. I still have another 9# to go before I get to a normal BMI, or to hit even the top of the Ideal Weight charts! I’d like to go maybe 10# beyond that point, because I’m sure when I ease up on the diet, I’ll gain some back. I’m great at losing weight, but I’ve always been bad at keeping it off. I hope to do better this time. (I say that every time). I sure hate all this excess skin though. My face is so wrinkled, I look at least ten years older than my age. Sigh.  My fault entirely; if I hadn’t stretched it all out so badly and waited so long to lose the weight, I wouldn’t be dealing with this now.

We are expecting nasty weather for the next three days & nights. Windy with rain and snow showers; perhaps a little bit of accumulation. I won’t be able to cut the foam insulation because it has to be done outside. So an enforced vacation. I don’t mind taking a few days to read, but I really REALLY wanted to move in before my birthday next week, which means I’ll have to work my butt off Saturday-Tuesday to get it done. In most of the rest of the house, it’ll just be one layer of 1.5″ foam because that’s all I could afford to buy. It should be fine for the winter, but I’ll need to finish insulating before the hot weather hits.  I can’t WAIT to move in! Every time I go over there I’m struck with how spacious it seems! I know that’ll sound crazy to you folks who have adult-sized homes, but the tiny house is 1 1/2 times as big a space as I’ve been living in for the past 4 1/2 years!  85 square ft. vs 58.5 sq. ft. I’m also often hit with the realization that it turned out to look almost exactly the way I pictured it in my head for all that time when it was only an idea on paper. That, to me, is a miracle!

7 replies on “Moving Right Along……”

WOW! How wonderful to have friends to stop and get the ball rolling even faster for you. I can only imagine how exciting this is getting now. Hope you can get moved in for your birthday. You look fantastic keep up the good work. Hope it warms up some so you can finish cutting the foam.
Have a fabulous Birthday !!

Wonderful news about the house and about your health. The work your friends have done sounds miraculous. I’m glad it’s so much good news.

Thanks Susie! I’ve gone from “burned-out” to enthused again!

Thanks Robin! I think the bed is my favorite part so far.