As I was leaving Mackinaw City Friday I stopped off at the Big Stone Bay Fishery off Hwy. 23. Their whitefish was $2 a pound cheaper than Kreuger’s in town!  I asked for 1 1/2 lbs. and ended up with over 2 lbs. (3 big filets) but he only charged me for the 1.5 lbs! Nice guy; I’ll definitely shop there again! The whitefish and salmon was $8 a lb. and the walleye was $10. Oh and they had really fresh farm eggs for $3 a dozen!  I made a “sauce” of fresh tomato chunks, green and red bell peppers, onions and lemon juice; cooked that for a few minutes on top of the stove then sprinkled the fish with Zatarain’s Blackened Seasoning (it’s really not super hot) and poured the sauce over it, sealed the foil packets and baked it in the oven for 20 minutes. It was really good!!

I’ve spent the last few days at friends’ house in Pinckney, MI. (Thanks Jerry & Sue!) I had electricity and everything!!  I thought my battery was not holding a charge, been getting some weird readings with my little meter. So when I got there I went through all the hoop-la to get access to the battery. It’s inside the camper so I have to fold the mattress back, rearrange the plastic bins, pull out a piece of plywood and finally get to the battery. I took the cover off the battery box and just thought I’d pull the whole thing out so Jerry could put it on his charger. Wellll…..I unhooked the wires but it’s a little bit big for this battery box, and no amount of tugging and pulling would get it out of there! It’s permanently stuck. We were afraid that any further pulling would break the little plastic handle.  So Jerry put his charger on it but it read fully charged in about 10 minutes! Maybe nothing wrong with the battery. When we went to hook it back up though, it kept shorting the fuses; either the in-line battery fuse or the 30 amp fuse in the panel box. We worked on the dumb thing for 4 hours and finally had to give up….it makes NO SENSE!!  There must be a short somewhere. I wonder if mice or chipmunks have snacked on the wiring??  I have an appointment with a Certified Master RV Technician in Asheville on the 26th. In the meantime, unless I’m plugged in somewhere, I have zero power and have to rely on flashlights and my handy-dandy inflatable solar lights. http://amzn.to/2doQW7z   I love them and use them daily. Er I guess I should say nightly. But I still really miss the much brighter LED camper lights when cooking.

While I was in that area I spent the weekend with an old friend Cindy from way back when I was 4 and she was 2, and visited with Ron & Kathy (I went all the way from kindergarten through high school with Ron) and my friend Tam (a friend since 7th grade) It was great to see them all, and they all fed me too!!  NICE!

On Saturday Cindy and I went to Obstbaum Orchards in Salem, MI. It’s a small place with parking for only about 30 cars, and only open on the weekends. They had a Buy 1 Get 1 Free offer for gallons of apple cider so of course we got two, and a dozen of their sugary donuts. Unlike most of the larger cider mills, there was only a few minutes’ wait in line, and they had a bunch of picnic tables both inside and out, where you can sit and drink your cider and eat the donuts. They also sell homemade pie!  So we sat awhile and enjoyed the nice weather. There were a lot of bees trying to drink our cider right along with us though! While we had our cups right up to our faces they’d still try to sneak inside!!  A little too close for comfort. But that was some of the very best cider I’ve had in years!  The donuts were good but they would have been better if they’d been hot.  We also got a 1/2 peck of Honey  Crisp apples for $4, I think that’s a really good price.

This afternoon I hooked up and drove down to Cabela’s in Dundee, MI. It’s not far from Jerry & Sue’s but it will save me an hour’s drive tomorrow; my next free parking spot on the way to NC is at the arts center in Berea, KY. Probably a 6 hrs. drive tomorrow, and then another 6 hr. drive on Friday to get me to Asheville.

I put my 2 gallon water jug on the floor when I packed up, and the floor and Roxie’s bed was wet when I arrived here!  A mystery. I moved the water jug over to the kitchen counter and forgot about it. I kept hearing a little tapping sound and even went over and tried to figure out what it was…..later I realized it was water dripping onto the floor. I guess (duh!) that water jug has sprung a leak. My only roll of toilet paper is soaked! So I carefully unrolled some bits and pieces and have draped them around the camper so they’ll dry. 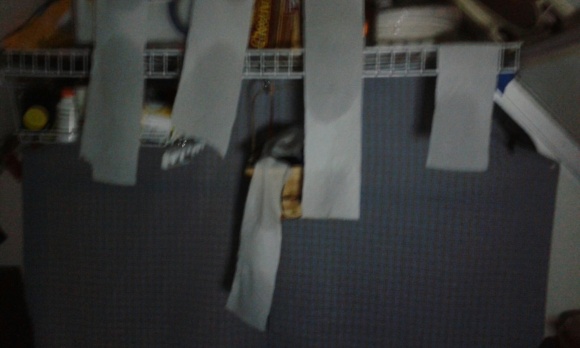 The bad thing about this Cabela’s is that it’s right across the street from a Russell Stover Candy outlet. Oh dear.