We had the MOST traumatic experience the other day! The sky got dark and it started to thunder. Roxie was in her little exercise pen outside and she’s terrified of thunder, so I got her and put her in the camper while I went to close the car windows. Just as I opened the camper door again, there was another big thunder and she shot out the door like a rocket and started running up the track to the road! I’ve seen her do this before; she goes into a blind panic and pays no attention to me. I tried to run her down but she’s MUCH faster than I am (especially since I can really only trot, not run). I followed her up to the road to see which way she went, then “ran” back to get the car. I had to spend time getting it turned around and then I have to go very slow on the track because it’s really rocky. By the time I got to the road, she was out of sight but I kept going and pretty soon saw her trotting along. I drove past her a little bit and got out and said “You wanna go in the car?” She came to me then and I put her in the car and drove back. Phew! We both shook and panted for a long time. That much exertion at 10,000′ elevation is really exhausting, plus we were both terrified, if for different reasons. If she had gone off the road into the woods, I would never have found her!  That’s what I kept thinking as I was chasing her; “Well, that’s the last time I’ll ever see her”.

She has also been waking me up at night every two hours or so. OH it’s so hard to have to get up, get dressed, and take her out every two hours! (Though the stars here are amazing) I thought maybe she had a urinary tract infection except that she’s just fine during the day! She can go 5-6 hours in the daytime. So I don’t know; it’s a mystery. Last night she was almost back to normal; she woke me at 12:45 to go out but then was fine until I woke up at 6:45. Boy it’s nice to be able to sleep; hope her two-hour intervals are a thing of the past.

This was one of the sunrises I got to see, thanks to Roxie waking me at 5:15.

This is a better photo of my long-range view from the campsite.  Some days are clearer than others. 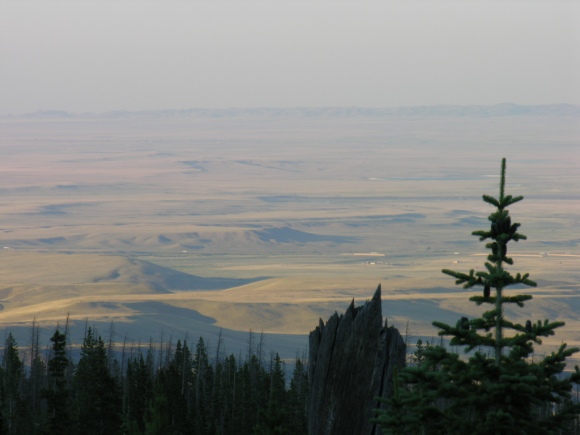 Boy I’m just noticing that my poor arthritic fingers are pain-free! I attribute it to being a year in this nice dry climate. I even have stopped taking Cat’s Claw, which really did help a lot. I’ll put a link below for what I was taking; if you have arthritis, it might be worth a try.

Sometimes I just leave the camper door open since there aren’t many bugs here, and almost every time I do, I get a tiny visitor….a Roufous Hummingbird comes buzzing in, makes a few laps around the inside of the camper, then buzzes back out! I’ve never seen a  brown hummingbird before. Here’s a picture (from the internet)

We got a good rain the other day and I have a new leak. Water was dripping out from the light fixture in the roof! Yikes, that doesn’t seem safe, though I think shocks from 12V are not nearly as bad as shocks from 110V. Still….I just can’t figure out where the leaks are coming from.

There are some really nice rocks around here; lots of quartz. I’m tempted to start collecting again, though the ones I REALLY like are the huge ones.

Here are a few Amazon product links. It would help me a lot if you need something from Amazon, to use one of these links to access Amazon. From there you can use their Search bar to get everything you need! Thank you!