Yesterday I went to Mecca, CA to the International Banana Museum.  I was very disappointed to find that it’s now only open on weekend afternoons. I was able to pick up a few much-needed groceries at the Toro Loco grocery store though. It was like taking a walk through a mercado in Ecuador!  All the signs were in Spanish only, and many of the meat cuts were the same as in Ecuador, and there were many strange things in the meat case that I don’t want to know what they were!  Too bad the prices were not the same! I paid $4.99 for a pound of good carne molida (ground beef) that would have cost $2.00 in Ecuador.   I never heard one word of English spoken in there!   I also stopped in at the 99 Cent Store and got a lemon squeezer gizmo so I can make fresh-squeezed lemonade from some of my bunk-mates.

I tried to go to Painted Canyon too but chickened out.  There was a sign at the beginning of the road that said “4 Wheel Drive Required”. I ignored it and went about 2 of the 3 miles in when the sandy road started to get soft and squishy, so I turned around and came back out.  Darn.

Here are some of the interesting rock formations on the way to Mecca.

My cousin is going to send me Roxie’s Flexi-Lead that I left there, via General Delivery.  I was shocked to learn that not all post offices accept General Deliveries!  I’m so glad she called and checked first.  Now I’ll have to get her to send it to Parker Arizona, our next destination, as it’s too late to receive it around here anywhere.

I can’t thank y’all enough for ordering through my Amazon link! (Above right) Last month I made $58 and this month I’ve already topped that!  It sure helps., and it doesn’t cost you anything extra.

Today we finally made it to Joshua Tree National Park!  Boy, it’s BIG!  We did a big loop around the park but never went all the way to the northern border, and I put over 100 miles on the car!  Since we’re camped near there, we went in from the south entrance & stopped in at the Cottonwood Visitors Center for a map.  The ranger told me that dogs are allowed anywhere a car can go, which includes several unpaved roads, some for 4wd only, some good for 2wd.  Also they are allowed on the paved trail at the Oasis of Mara near Twentynine Palms.

Entering from the south, you don’t see any Joshua trees for 25+ miles.  I drove through the Belle and White Tank campgrounds, they’re nice but I was expecting to see the sites backed into the rocks and they weren’t.  I guess the campground I remember that was that way (rocks on 3 sides of the sites) must have been at Indian Cove CG which must be entered from north, and does not connect to any other park roads.  I’m pretty sure that’s where my rock climbing school took place.  I only saw a few climbers in the southern part of the park.  See the teeny people on top? 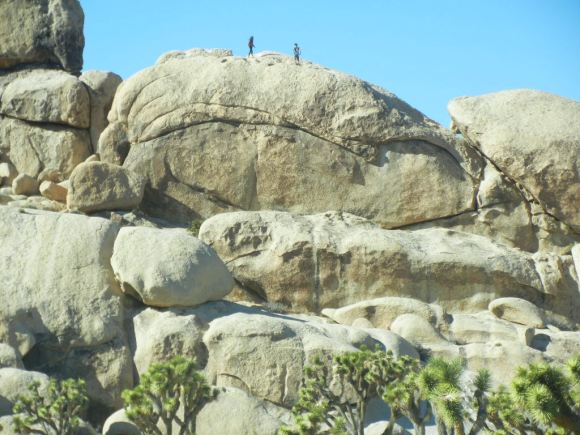 I was hoping to see some Bighorn Sheep and I even went on the unpaved Bighorn Pass Road and through Sheep Pass but the sheep were not cooperating.  The only animals I saw were a couple little gerbil-like things!

Here’s a photo of two of the campsites in Belle CG and White Tank CG. Don’t you love that little rock balanced on top of the rest? 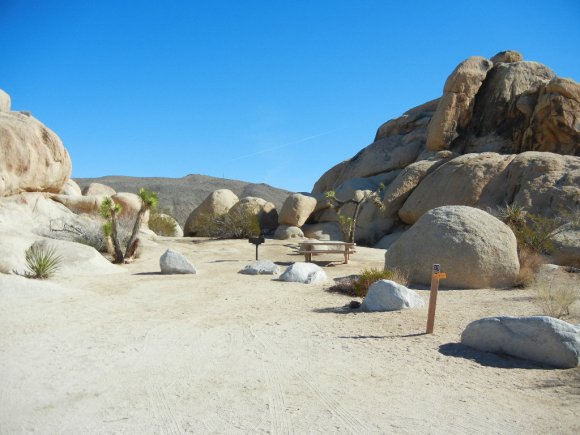 Finally we start seeing some Joshua trees!  This is on the Bighorn Pass Road:

And here’s the Cholla Garden.  Wow, zillions of those evil little suckers!  These are called Jumping Cholla. I got this explanation from Wikipedia:  “The “jumping cholla” name comes from the ease with which the stems detach when brushed, and sometimes they even jump short distances. Often the merest touch will leave a person with bits of cactus hanging on their clothes to be discovered later when either sitting or leaning on them. The ground around a mature plant will often be covered with dead stems, and young plants are started from stems that have fallen from the adult.”

From afar, they look very fuzzy and cuddly:

But up close, they get more sinister: 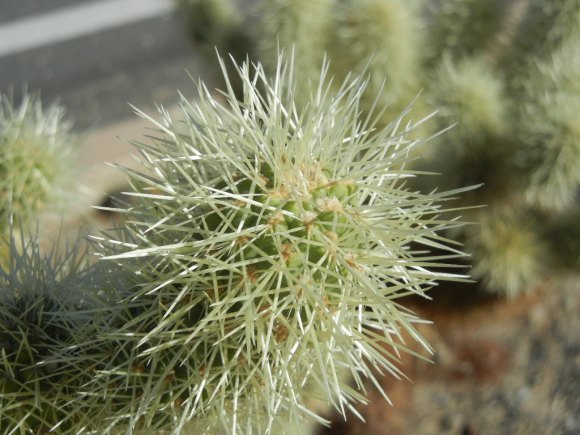 And lots of loose ones on the ground, too:

Each of those spines has microscopic barbs! So removal is extremely painful, and the sites often get infected.  Bad plant, bad!

The rest of the photos are some cool rock formations. I love that it looks like some gigantic child was playing blocks with the huge rocks! 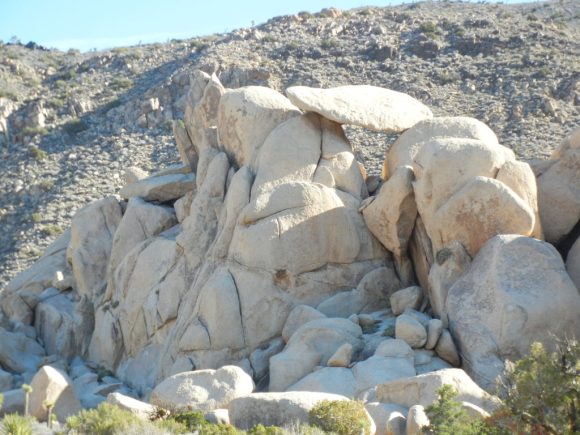 Tomorrow we head to Crossroads CG on the Colorado River near Parker Dam, CA.