WOW! This morning when I took Roxie out, I saw 4 hot air balloons; always a really cool sight, and it happens almost daily here. A little while later I heard that distinctive sound of the propane burner and I looked out…..there was a balloon landing about 50′ from the camper! How cool is that! The sun of course was coming from the wrong direction but I snapped a bunch of photos out the door of the camper. I have never seen a hot air balloon up that close…..they are massive!! I wondered if it would collapse onto the camper but there’s a rope hanging down so someone can direct where it falls.  About five minutes later, another balloon landed right next to the first! WOW! 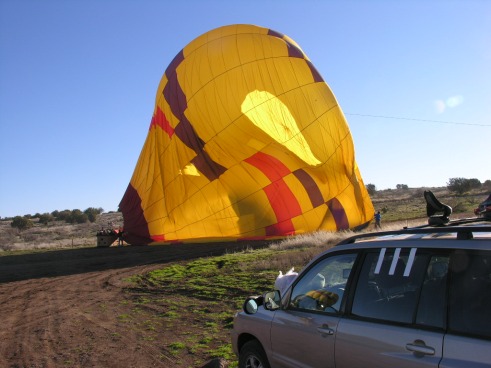 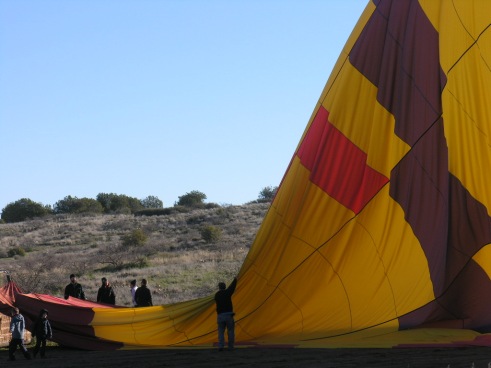 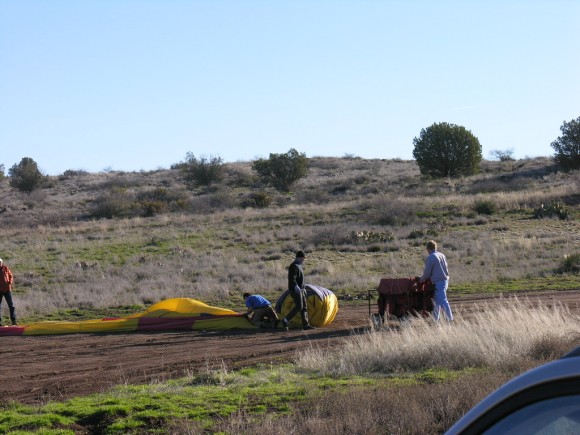 Yesterday I had a not-so-nice experience so today’s balloons were extra uplifting. The little red battery icon was lit up on my car’s dashboard, so I took the car to a repair place that my friend Donna recommended (she lives here in Cottonwood). They said it’s the alternator. You may remember that just last May I broke down in Gallup, NM and had to get an alternator and battery……yeah. The guy at this place said that they don’t use that brand of rebuilt alternator because they don’t hold up well. He’s quoted $427 to put in a new alternator. That’s bad news but what makes me feel worse is that obviously Pep Boys in Gallup ripped me off…I paid around $800 for a rebuilt alternator and battery that only lasted nine months!!  Grrrrr.  I am stuck here at camp until my Wednesday afternoon appointment. I checked the battery this morning and it’s pretty dead; so glad I have the solar panel to charge it up!

Ahhh…breathe in, breathe out, shake it off…..here’s the sunrise from a couple days ago.

The sunsets have not been really great because there haven’t been many clouds in the evenings. It’s been very pleasant, near 70 degrees during the day, but with enough of a breeze that it’s not quite warm enough to sit outside for very long.   Last night the low here was 35 and Thursday and Friday’s highs are supposed to be 80. What a huge difference a few days make! I’m going to be miserable in 80 degrees, but I have to hang around here until Friday when I take the camper back to get the brakes checked again.Something is still wrong; they’re still not working. Boy this month is sure a big money pit! $250 for the camper repairs already, plus $427 for the alternator, and who knows how much more to get the brakes fixed! Ouch. I seem destined to not ever have any savings.

Thank you so much for using my Amazon link for your purchases! It doesn’t cost you any extra, and I get a little percentage based on number of items sold and amount spent. Please think of me before you place an order!  Even small purchases help to raise the percentage.       Here’s the link:  https://www.amazon.com/?tag=litbitliv01-20