We are into our second week at Lyman Lake. What a great campsite, especially for only $4 a night! Our Womens A-Frame Camper (WACS) friend Bobbi from Wisconsin has joined us for 6 nights; she’ll be leaving tomorrow to meet up with other camping friends in Wisconsin. My only complaint is about the biting flies. They are voracious on hot days, and they don’t seem repelled by anything.  We’ve been kayaking and swimming a lot, and I’ve even been fishing! I caught about a dozen little fishies, or maybe it was the same two fish 5 or 6 times! They were all too small to keep, anyway. I’ll keep trying. We all definitely want to come back here next summer, but maybe get size #3 which has a larger beach area.

We’ve been eating most dinners together, which is unusual for us. We’ve had some good meals….pork chops on the grill, Joe’s goulash, sloppy joes. Today we went to lunch at Jack’s Restaurant in Rapid River. We loved the whitefish there last year but today it wasn’t as good. Good desserts though! Next door to the restaurant is a shop that never seem to be open, but they have the coolest “found object” sculptures in the window! I’d love one of those fish!!

We have my little folding table set up in one of the screen rooms. We really miss having a picnic table…..they usually are not provided at the free or dispersed campsites.  We found this critter inside the screen room……Deb calls it the Creature from Hell! It looks like a scorpion/dragonfly! 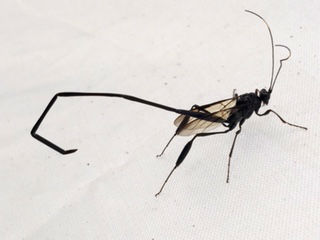 Deb bought a nice lightweight nylon hammock that rolls up into a tiny football-size package. She used it a lot at Hovey Lake but when she put it up here, EPIC FAIL! She crashed to the ground and is now nursing a very sore (possibly cracked or broken) tailbone.  Ow!

Since we only have two kayaks, Deb uses mine to go out with Bobbi. We sort of take turns. Finally after nearly an entire year, I get to use my “new” kayak! I really like it, it’s very comfortable and I can easily get in and out of it with my bad knee. I wade out to almost knee-deep and just sit down into it, and to get out, I do the same; swing my legs over and just stand up in knee-deep water! It’s SO much easier than trying to get up out of a sit-inside kayak. Deb says it’s the most comfortable kayak she’s ever used! (Mine is the orange one with built in backrest; it’s a Jackson Riviera) 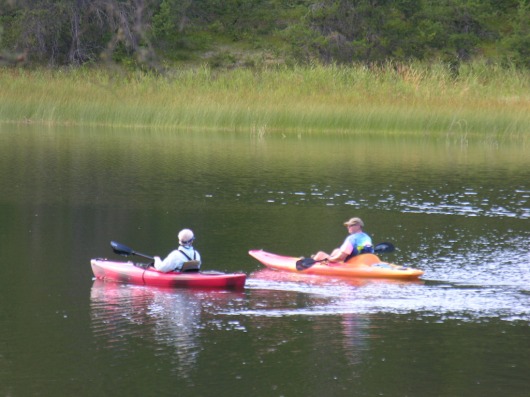 We had some really hot days but lately it’s been pretty perfect….mid to high 70’s with nice breezes. Love it!  We’re really going to hate to leave here.

Today I have to get 3 new tires, ugh! There goes the savings plan for this month. I guess it’s just always going to be something. I got an oil change and asked for tire rotation and the guy told me I’d be wasting my money to rotate them; they were nearly bald and had cracks between the treads. So 3 tires….$340. Sigh.

Yesterday we moved to Lyman Lake #5. It is $4 a night with the Geezer Pass, for as many campers as you can cram into the site! (More or less) It MUST be reserved ahead of time though, no walk-ins allowed. It’s considered a dispersed campsite and there are lots of them in this general area, and they are all very populat so you have to plan way ahead. I think I booked this site in February and was lucky to get it. It’s not far from Chicago Lake, where we were last month. So that means about a 50 mile round trip drive to Manistique for groceries, etc. And no wifi signal, though I am getting 1-2 bars of cell service. Deb is still having a lot of battery problems so she opted to go to Camp Seven Lake Campground for 2 nights to get her battery fully charged with an electric site for $13 a night.

Lyman Lake is great!!  Our site is gigantic; there’s room for 8 or 10 campers, as long as they didn’t all require sun for solar power.  And the lake has a nice sandy bottom, so no more creatures from the green lagoon when we swim.  The only drawback so far (besides no wifi signal, and I AM addicted to the internet, you know) is lot of mosquitoes at night. I wish I could figure out how they all find they way into my camper! During the day, our biggest problem with bugs if the big stable flies that are almost an inch long, with sharp teeth!

Here’s the view from my camper door: 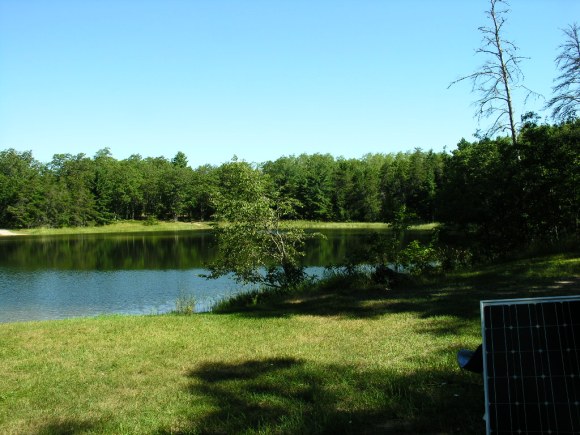 There are several steps down to the little swimming beach, and the water is perfectly clear!

Here’s Roxie in her screen room. She LOVES it out there and never wants to come into the camper!

I am REALLY going to get the kayak off the car and kayak this lake!!!  Really, I am! And maybe do some fishing from the kayak as well. Free food would be good!