My shed delivery was delayed from Monday until Thursday. And I’m glad! I just decided Monday (the original delivery date) that I don’t want the shed in the site I had all picked out (and that neighbor Frank had cut a bunch of limbs off the trees, and I dug all the rocks out!) I think a better place will be right where the camper is sitting now. And oh how I dreaded having to move the camper! In addition to all the “normal” junk that I carry around, I now have a whole bunch of extra things that live in here now, since they can’t be allowed to freeze. Four house plants (including Celery), 5 huge cans of Great Stuff Pro, a big can of Great Stuff Gun Cleaner, a couple quarts of paint. I also had to dismantle Roxie’s little pen and dismantle the Buddy heater propane hose that’s threaded in through an outside baggage door, and it’s all duct-taped shut, too!  I wanted to hook a tow rope onto the ramshackle stupid-looking pallet “shed” that was here, but I couldn’t find my tow rope.

The new site has a lot of advantages and only one disadvantage; it won’t get much protection from the wind. But it will be South-facing, which is the best orientation for getting winter sun and keeping out the summer sun. I can leave the wifi booster in the same place, and I know it works great there. The solar panel also works great here, without having to reposition it at all during the day.  And the driveway will be shorter, if I ever get around to getting cinders for it.  And this site is much much larger. The other site was just too small; the front yard could only have been about 5′ deep, and directly in back I would have been stumbling around on big rocks.  This site has good access for a big propane tank and 275 gallon water tank as well.  So I’m pleased. Frank came over Tuesday morning and cut one tree down and cut a bunch of  branches back out of the way.

I worked all day yesterday on getting ready to move the camper. The new spot is right around the corner so it won’t be too far to go to reach the fridge from the shed. I’m afraid it’ll be awhile before I can spare the money for even a used RV fridge! I moved some more rocks and a pile of dead branches & twigs. There were 3 piles like that here, and now they’re all in one big pile. Hopefully I can burn it one of these days, if it ever rains. Boy I was really tired & sore by the end of the day. I finally got the camper moved and set back up right before dark.

Oh! And yesterday afternoon I heard some big equipment up on the hill, with the beep-beep backup alarm. I saw a glimpse of yellow and went flying up there….it was the road scraper guy! My road is a county-maintained road but in this huge subdivision with so few homes, they don’t develop all the roads unless someone lives there.  I have a stretch of rocks about 50-60′ long that I have to creep super-slow over. He said he didn’t think he could use the road scraper on them because some were really big, and they’d break the blade. But they have some special cinder mix of big and small stuff that they just put down over the rocks. He said he’d tell his supervisor about it, and I’d get a high priority……and that they always lay new gravel before the first snow, so it would probably be in the next 2-3 weeks!!  I’ll have a real ROAD! Wow… a house AND a road! I’m feeling pretty giddy! 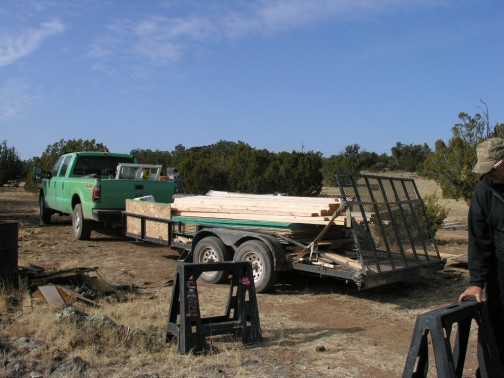 This morning the shed arrived. They had to drive up from Tucson, and arrived at 11:45. Within 20 minutes they had the trailer half unloaded and had a good start on putting the floor together! I had asked if they could insulate the floor at all, since it would be nearly impossible to do when it’s just a foot or so off the ground. They included 1″ of rigid foam in the quote but it’s so much better! Once they got the floor framing done, they tipped the whole thing up and nailed 4×8 sheets of Masonite to the whole underside. That will work as a vapor barrier and a mouse/rat barrier too. Then they let it back down and filled between the joists with loose cellulose, so it’ll be R-19! And the floor joists are 12″ on center, not the usual 16″ on center. It should be very sturdy!

The lead guy told me that the 2×3 windows I wanted came in with frosted glass! So they went to Lowes and the smallest vinyl double-pane windows they had with grids were 3×3. Yikes, that does make a difference to my plan but I can make it work.  I love the look, and they are high-quality Pella windows.  He said that the 3 windows cost him $550!! Three 2×3 windows would have cost well under $400, but since they have to eat the cost, I don’t mind. They are sliders instead of single-hung, but I guess that’s OK too.

He also gave me a choice of which end the 3rd window goes, so I chose the opposite end from what I had on my original plan. That way I’ll be able to see if someone is coming up the driveway, and all the mechanical stuff…fridge & stove vents, etc. will be on the side of the house that no one sees. I just have to flip my plan & make a mirror image. It’ll actually end up better, as I had specified a right-hinged door and that was wrong.

Wow I’m very impressed with these guys! They were here less than 6 hours and have the floor all done & insulated, the studwalls all up, windows in, and the roof all dried in! They really know what they’re doing. And the materials are quite a bit better quality than what *I* would have used. Better windows, and the sidng is 3/4″ tongue and groove…I probably would have used 1/2″ or even the cheapie 3/8″.  They caulk all the seams and spackle the nailheads before painting.  He said they have only ever had 3 callbacks for quality issues, and I believe it.

Sorry about all the shadows on this last photo; it was getting late in the day. It looks rather plain but once I build the shutters and windowboxes, it’ll be really cute. They’ll be back tomorrow, for more excitement!

I’m getting one of these personal alarms, supposedly for use when you get mugged, the 130 db alarm scares away the mugger. But I’m not too worried about getting mugged; I’m getting one for use around here, if I’ve fallen and can’t get up, for instance. (Hey, I’m OLD!) It comes with a carabiner so I can hook it onto my waistband if I don’t have a pocket, it’s VERY loud, and the alarm keeps up for 30 minutes unless you shut it off. I’m going to tell the closest neighbors about it so if they hear it, they’ll come and check out what’s wrong. I saw a Facebook ad and they wanted $90…..this one is less than $10 on Amazon.   http://amzn.to/2BJCrqy

I actually looked into getting a Life Alert, but they require a land-line telephone.