Today we drove out old Route 66 to Oatman, AZ. It’s 28 miles from Kingman, mostly on a very twisty road up & over Sitgreaves Pass, with lots of switchbacks and sheer drops with no guardrails. Flatlander Deb was a little concerned about that.

It’s an old gold-mining town from the early 1900’s that’s now a bunch of cute shops, with wild burros roaming the streets looking for handouts. Many of the stores sell burro pellets, and I had brought some old carrots to feed them. As soon as we parked, three burros came over to welcome us. Annie wasn’t too sure about this thing, but they did get nose-to-nose. I missed getting a photo of that, but here they are having a little discussion. 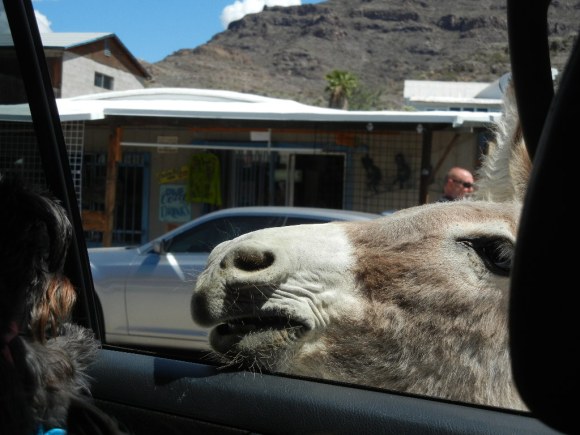 I think Jeanne and this burro are french-kissing??  Well, they would be if the window glass wasn’t in the way. It looks quite passionate!

And this one is after the bag of carrots I’m holding….really! It sure looks like he’s interested in something else…….

Here’s the old Oatman Hotel, famous because Clark Gable & Carole Lombard spent their wedding night there in 1939, after getting married in Kingman.

We were going to leave the dogs in the car but Roxie was barking incessantly and getting herself all overheated, so I had to take her with me. One shop owner told me to be sure and not let her anywhere near the burros, as they had already killed four dogs! They STOMP them to death! The local dogs know to leave them alone.

Because of my knee, I couldn’t keep up with the other two so Roxie and I just sauntered along, stopping to rest on benches along the way. So I got to see all kinds of burro capers.  One lady was walking along trying to eat an apple and she had two faithful sidekick burros that stuck to her like glue. She’d turn and go back the other way and they’d follow like trained dogs!  She finally took some big bites of the apple and gave them to her new devoted friends. Another lady stepped off the sidewalk onto the street carrying a paper bag and a burro came up behind her and ripped the bottom out of the bag! The lady was shrieking “my CANDY!” and she and the burro had a big race to see who could pick up the most candy. I didn’t see what it was and don’t know if it was wrapped candy or what, but I think the burro was winning.

On the way back we stopped alongside the road so Deb could hike up to check out a mine. That little tiny black dot in the lower right is her.

On the way back we stopped at In-N-Out Burger. Jeanne was anxious to go there because it had been 24 years since she’d had one in California.  Pretty apt name as far as I’m concerned, because I could barely make it back to the camper before that burger came back OUT.

I took this photo of last night’s sunset….very serene, and I love seeing the shadows on the folds & shadows of the mountains. 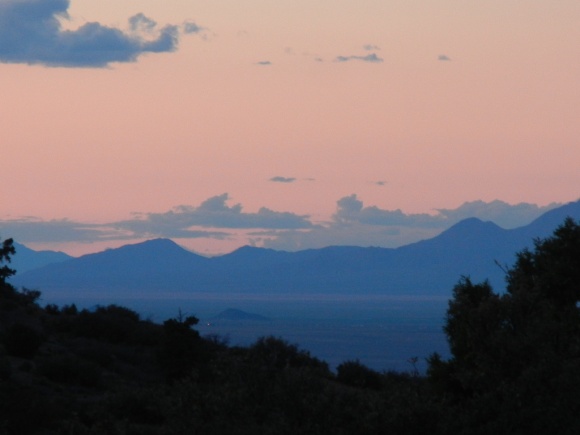